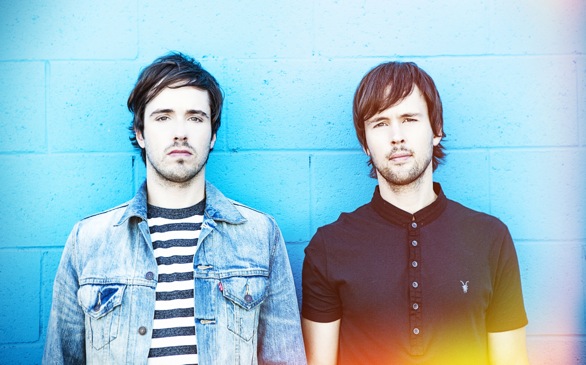 "Trojans" has been playing on many radio stations and has brought Atlas Genius into our homes. The guys will be playing L.A. tomorrow night, supporting Imagine Dragons at the Wiltern.

Campus Circle spoke with Keith Jeffery of Atlas Genius while the band was in Chicago. Fresh off of a great show at the Chicago House of Blues, they were excited to head to Canada to play a few shows.

“In a couple of days, we’ll be headed to northern Canada. We’re really looking forward to it, but with all of this cold and snow, I’m really happy to be getting back to the West Coast to get into a little warmth again! It’s been crazy. There’s a lot of snow falling in Chicago,” said Jeffery.

The band quickly made their way back to warmth with their upcoming shows in Austin, Texas for South By Southwest, continuing their tour in support of the new album When it Was Now.

The band is made up of brothers Keith Jeffery (guitar/vocals), Michael Jeffery (drums), Steven Jeffery (bass) and Darren Sell (keyboards).

“Darren moved over to Australia; we just sort of randomly met and got together as a band. It was one of those serendipitous meetings…He joined the band, and the rest is beautiful history,” said Jeffery.

He also elaborated on how different mindsets are need during tours and during their writing process.

“Touring is just such a full-on thing as far as the time,” he said. “We’re either traveling or playing or sleeping, so there is not a lot of time where we are able to write new stuff. The way I look at it is, you’re grabbing a whole bunch of influences and storing them away so that the next time that you have to write, it eventually comes out."

While they might not be writing more for us while on tour, they will bring out the inspiration when the tour slows. Writing as a band, they work together to bring out the best in each other.

“Sometimes it will be a jam everyone is playing together,” said Jeffrey. “There will always be something that stands out and later becomes a song. Other times, you know it will be me late at night in a studio with my acoustic guitar. It just depends. It’s song by song really.”

During the last 18 months, the band has made some major changes in their support team. Signing with Warner Bros. music has afforded them the ability to make the tour and bring the music to us.

“Warner Bros. music was very respectful,” said Jeffery. “That’s why we signed with them…they were respectful of what we were doing on our own, and they asked us to continue to do that.”

When asked about the band’s plans for the future, Jeffrey conveyed excitement about the possibility of a tour through Japan and Europe. With great hopes for a worldwide tour and the performances to back it, the band is here to stay.