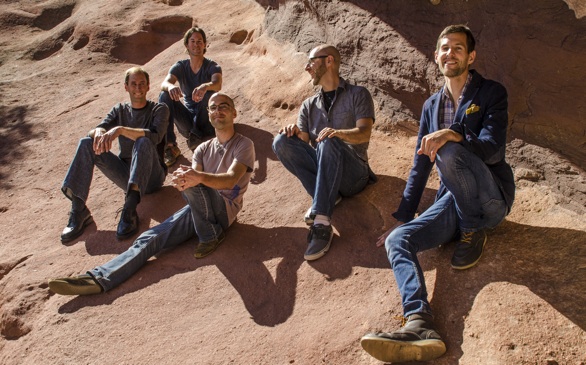 Lotus wil be making its way to the City of Angels at the end of the week.
(Credit: Tobin Voggesser )

For well over a decade, Lotus has been a band constantly in motion.

“We’re touring all the time,” said bassist and sampling artist Jesse Miller prior to Lotus’ headlining show on Friday night at the El Rey.

Whether it’s been an endless touring schedule or a steadfast commitment to writing new studio material, the Philadelphia/Denver-based quintet only knows how to work at one speed.

But while Lotus has lived life in the fast lane since forming at Goshen College in Indiana, it’s also made a point of evolving its sound from one album to the next.

On its latest full-length effort Build, Lotus does just that by tightening any loose ends that may have come undone on its self-titled release in 2011.

“I didn’t want to draw things out,” said Miller, who teams with his twin brother Luke to write all of the band’s music.

“It’s that classic album length where it finishes and you say ‘what just happened there? Let me listen to it again.’”

For instance, “What Did I Do Wrong” and “Kodiak” are two songs that exemplify Lotus’ jam roots as well as its continued interest in electronic dance music.

“This isn’t an album where you sit at home with headphones and a cup of tea,” explained Miller. “It’s this big energy where you can imagine these songs being played live. That’s what sets Build apart as an album.

“It’s this thing we’ve been focusing on and honing for a long time — this idea of building it up into something big, and hopefully the end product is bigger than the sum of its parts…we’ve really hit on something that is the sound of Lotus.”

Yet, despite incorporating a wide range of styles over the years, Lotus has still been forced to fight off the media's stereotypes and labels.

“We’re the band that introduced electronic music to the jam scene 10 years ago,” said Miller. “We were the band playing after the bluegrass band with a bunch of synths and samplers.”

So, call it “jamtronica” if you like, but that would only be undermining what Lotus is really all about.

“You always want people to take a band or a piece of art at face value for what it is,” continued Miller. “But everybody needs some kind of context, so for better or worse, we’re thrown into that context.”

There are similarities to Lotus no doubt. After all, it’s not uncommon for the band’s fans to enjoy other genre-defying acts such as the Disco Biscuits, Particle and Sound Tribe Sector 9. Even more, it’s well noted that some of Lotus’ earliest influences were jam bands like the Grateful Dead, Allman Brothers and Phish.

For a long time though, many fans believed that jam bands do not flourish in the studio. Maybe it’s because many of them have found a home on the road. Or maybe it’s because their shows regularly extend past the two-hour mark and contain long stretches of improvisation.

Although Lotus has moved away from those tendencies on its last two albums, when it comes to performing live, it hasn’t totally forgotten where it came from.

“I think in our early days, we approached it that everything we wrote had to have these lengthy, improvisational sections,” said Miller. “And in some ways, I found that very limiting.

“When we compose now, we’ll write some things that are open-ended and designed to be this launch pad for live improvisations.”

Like most jam bands today, Lotus’ strongest ties remain on the East Coast and more specifically in the Northeast. Of course, after playing sold-out shows in Boston and New York City at the end of January, it’s easy to see why.

Nevertheless, developing more of a West Coast stronghold is still a work in progress for Miller and his band mates. And with a Friday night gig in the country’s No. 2 market, Lotus should definitely have the El Rey packed after its last stop in the City of Angels more than a year ago.

“I’m really pumped to finally get to L.A. on a weekend,” said Miller. “That show is really going to go off.”