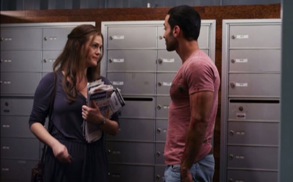 Dorfman in Love follows Deb Dorfman (Sara Rue) who volunteers to cat-sit for her unrequited love, a handsome journalist named Jay (Johann Urb). In seven days, she meets another man named Cookie (Jay's neighbor) who appreciates her and teaches her to appreciate herself. He helps her stand up to her family who love her, but take advantage of her all the same. In the end, Deb is left with a choice: Jay or Cookie? Or something or someone else?

Leonard Hill, producer of Dorfman in Love, used to work in television film, until the reality TV industry blew up and left his industry in the dust. He started working in real estate, repurposing and reinventing rundown properties, mainly in the Downtown Los Angeles area. It was during this time that the opportunity to produce Dorfman in Love presented itself, and it was an opportunity Hill could not turn down.

Campus Circle: What was your inspiration for this film?

Leonard Hill: My inspiration was the regeneration of Downtown.I was sitting in a restaurant, and I saw [writer] Wendy [Kout] approaching me. She said, “What are you doing here?” Wendy was a valley girl, kind of like Dorothy in The Wizard of Oz at the beginning when it’s black and white right before everything turns Technicolor. She was mesmerized.

I offered to let her stay in my loft…She said, “I’d like to propose a story that tracks a daughter-father relationship...”

We started kicking around ideas, and kicking around stories gets pretty exciting…I was more derivative in my imagining, but Wendy thought, “I want to do something original. I like this idea of a woman finding her life in Downtown.”

CC: How difficult was it to get Dorfman in Love made?

LH: My idea was: Let’s take it to studios and pitch. They’d do it if Jennifer Aniston or Katherine Heigl were the lead, someone like that… But we needed a woman who was relatable…We wanted to find the best actors for the role and not the best names for the marketing…And studios aren’t film production companies - they’re distribution centers.

We knew there was a way of doing this. We wanted to keep our vision pure…Luckily, many of the locations were available to us because of my history in real estate.

CC: What was it like working with the actors?

We brought on a director that was 24 years old, straight out of USC film school. We needed a point of view that wasn’t going to be a Xerox of our point of view. Elliott [Gould] said, “I want to meet the director.” We introduced Elliot to [director] Brad [Leong], and it was an interesting meeting. Elliot really cared about the material…That’s who Elliott was.

Then there’s Haaz [Sleiman], a Lebanese actor born to Muslim parents. You’re always casting Muslim characters as terrorists, but casting him as the romantic lead…I loved that dynamic and excitement, and I think Brad did a good job.

CC: What do you think about the contradictory representations of Los Angeles in the film?

LH: The subtitle of the film is “She’s a work in progress,” and I think the city is a work in progress. I think it would’ve been dishonest to show the gentrified side of L.A. without showing the diversity as well. We were determined not to sugarcoat Downtown, but show it in its reinvention – so we felt that it was incumbent to show both sides…At the end, we show even the homeless man can reinvent himself…and his last image is a man with increased dignity.

Dorfman in Love releases in theaters Friday, March 22. There will be a Q&A with filmmakers opening weekend. For more information on the film, click here. To purchase tickets, click here!