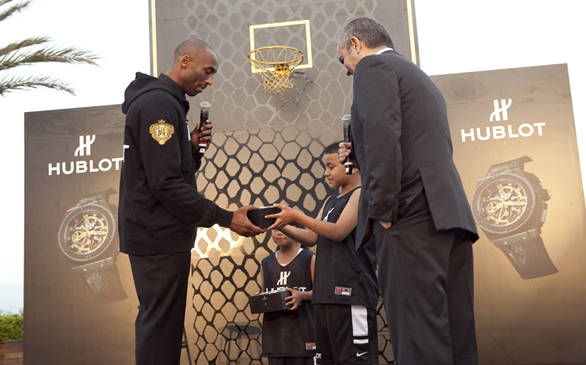 Kobe Bryant is not only an iconic figure around the globe, but he is also the new brand ambassador for the Swiss luxury watch brand, Hublot. In January, Hublot was also announced the first official time keeper of the Los Angeles Lakers.

Last night, Hublot CEO Ricardo Guadalupe stood on a beautiful stage set up at the rooftop of the London Hotel in West Hollywood and stated that Hubolt has also become the first brand to be marketed in European soccer.

Guadalupe said that it was their goal to enter the basketball world in America. He continued by stating that several years ago, Hubolt decided to start marketing in the east coast with the Miami Heat and Dwayne Wade, but believed that they needed to have “the best of the best” so they decided to market in the west coast with Lakers star, Bryant.

“Hublot connects you to the future,” said Guadalupe.  “And it’s important to transport this message by bringing the most iconic living athlete, Mr. Kobe Bryant…he’s a professional [and] he has success. Today is a big day and an inspiration for us, and we look forward to having an incredible and successful partnership, Mr. Kobe Bryant.”

As Bryant walked onto the stage, he was wearing a zip-up Hubolt sweater over his shirt and tie. “This feels good for me,” said Bryant. “It’s a great partnership. I feel honored to be part of the Hubolt family, and I truly feel honored to be here.”

Guadalupe emphasized the importance of diversity for Hublot.

“Kobe is much more than just an athlete; he’s great as a person [and] he’s really diverse,” said Guadalupe. That’s something Hublot looks to represent as a marketing brand.

Bryant likes the mixture of sports and fashion.

“I think the combination of sports and fashion with Hubolt in the mix goes hand in hand with my philosophies and style of play,” he said. “Obviously, the generosity and to create a Black Mamba watch is fun. I never dreamed about having this opportunity of doing this with watches. I always grew up thinking it was going to be sports wear and shoes, so it’s truly honoring to be doing something like this in the fashion realm with a very successful watch company.”

After this, Guadalupe asked, "Kobe, from where did you get your nickname the Black Mamba?”

“It just comes from the style of play. It’s like how I kind of play. It’s like my alter ego,” Bryant answered with a huge smile. “When I step on the court, there’s no more smiling, no more joking around. I become a lethal reptile.”

A young girl and boy presented Kobe with a custom watch that had interior colors of purple and gold, a snake that represents the black mamba and his legendary number, 24. Guadalupe announced that the newly customized luxury watch specifically designed for Kobe would only sell 50 pieces in a limited edition and that some have already been sold.

Guadalupe also said that a certain amount of each watch sold will be given to charity and will also be given to the Kobe and Vanessa Bryant Family Foundation.

“We all know the significance of giving back,” said Kobe. “And its importance for everybody to do so. I think if you have a platform where you have position your voice can be heard, we have more responsibility to do that – to raise awareness, to give back, to help inspire others and help put them in a position to be successful. Through this partnership, they’ve been gracious enough to help our foundation.”

At the end of the event, Hublot gladly signed a $30,000 check to the Kobe and Vanessa Brant Foundation.