Matmos: The Marriage of True Minds 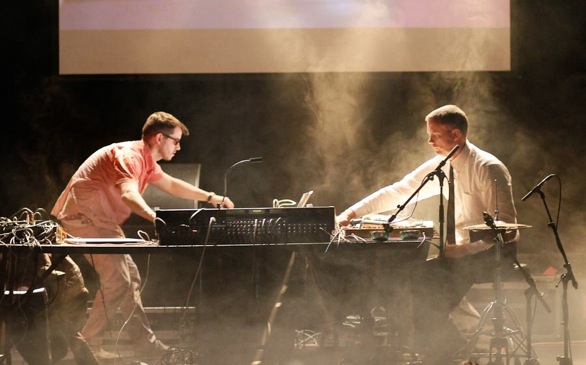 The cover of this CD features a picture of Matmos front man Drew Daniel with cut-in-half ping-pong balls covering his eyes, and the disc’s liner notes indicate that the band was involved in experiments in E.S.P. during the making of the record, including efforts by Daniel to beam his creative musical thoughts directly into the minds of band members and others. Whether you think this is a gag or not, Daniel and Matmos should certainly not be written off as nutters.

The album begins with “You,” a bit of paranormal jazz embellished with lyrics about telepathy spoken by a female voice and that seemingly float in from a dimension other than the one most of us live in. Similar sounds and the concept carry on throughout the album. “Very Large Green Triangles” has a hypnotic, experimental beat and is apparently about U.F.O.s.The self-explanatory “Teen Paranormal Romance” features a kind of scat language that maybe mimics the cross-dimensional ecstasy of telepathic canoodling, and “In Search of a Lost Faculty” has some of Daniel’s experiment “percipients” vocalizing that they are receiving images of triangles over music swells punctuated by chiming triangles.

The Marriage of True Minds is definitely not for everybody, but the adventurous listener can’t help but be captivated.