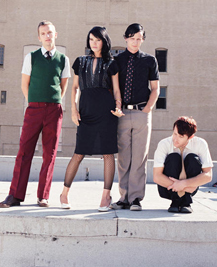 Untitled Document "We never really decided to start a band. It’s like moving in with your girlfriend, like ‘how’d that happen?’" says Monsters Are Waiting drummer Eric Gardner of his band’s humble beginnings. While the L.A. based quartet’s formation may have been serendipitous, it has since turned into something far bigger for Gardner, vocalist Annalee Fery and guitarists Andrew Clark and Jonathan Siebels.

"A lot of times, a songwriter will get a band together. This was more like, we would turn the recorder on, just play, then go back," says Siebels of Monsters’ creative process. "It’s real collective, it wasn’t like it was just one songwriter." Gardner also echoes these sentiments, saying, "Everyone’s real open to trying new things, it’s just trial and error. I’ve never been in a band where it was a collective creative process like this and it’s cool and it’s different and sometimes it works and sometimes it doesn’t work at all. We’re here because we like playing together."

While the band may live by the method of trial and error when it comes to their spontaneity-geared songwriting, the band feels their ability to create in such an environment without sounding forced is a testament to their unique group chemistry. "A lot of times that doesn’t work, to just get in a room and start playing," Siebels says. "I think the fact that it has worked for us so far is sort of what’s made it unique to us. That’s the glue, that we’re able to do it."

Much as songwriting is sometimes hit and miss while searching for the musical gems, the band found that discovering the right mix of individuals to create that music was not so far from that process of weeding out weak links and sometimes failures. Says Gardner, "We’ve all been in bands where things have become unpleasant for one reason or another and I think we all just want to make music in a situation that we all enjoy." Along the way, the band has developed a relationship among them that’s not too far from a familial one. "I had three older brothers so it feels the same almost," says Fery.

Though the band members are certainly not out to write music for anyone else, they certainly won’t argue if other people like what they do make, either. One of Amoeba Record’s favorite local artists, Monsters have found quite the growing legion of followers. But really, look at the band, who’s surprised?

During our interview, Gardner quipped to Fery, "People say we’re a sexy band, and I think that has something to do with you," to which Fery half-seriously retorted, "I hope not, I don’t want to be sexy."

Try as she might to avoid it, Fery’s band does have an inherent charm about them, a slick coolness that only Hollywood bands can truly embrace, but they do it while maintaining a three-boys-and-one-girl-next door likeability and earthiness. With all realization of the unintended pun, Fery herself is quite literal in that aspect, revealing that underneath her well-dressed, charismatic, sighing and moaning stage persona is a soft-spoken Oregon girl who loves gardening, "Law & Order" and says "for shizzle my nizzle" in regular conversation.

"I think it was kind of an escape for me," says Fery of her motivation to sing. "I went to a Catholic school and I had to go to church every morning growing up, so I got into the choir there and that was horrible. Then later I didn’t go to a Catholic high school and I got into choir there. It was just an escape from reality, which was good because I grew up in Oregon where it rained all the time, it was kind of depressing."

Similarly, the rest of Fery’s band mates have had the musical itch from an early age. Fondly recalling his early childhood, Gardner says, "I used to play along with Fleetwood Mac’s Rumours with Tinkertoys on boxes when I was 4, that’s where I started."

Granted, it has been some time since Gardner was 4-years-old, but nevertheless he and his band remain untainted by the jading effects of trying to rise up in the L.A. music scene. "It’s been a pure experience so far," Siebels says. Continuing, Gardner adds. "I think that not only musically, but on a business level too, we’ve done everything on our own. We funded the EP on our own, we’re selling it on our own, we haven’t had any outside stuff that’s been inflicted on the band. It’s been all us musically and in every other aspect of the band."

Monsters’ ability to keep themselves grounded has undoubtedly served them well thus far and will undoubtedly continue to do so, something Siebels is confident his band will never lose sight of. "To me, being in a band and playing music is just that," he says. "That’s what I enjoy doing. There’s no political underline or anything like that with us. We all love music and we all love playing it and it doesn’t go much further than that."

Monsters Are Waiting’s self-titled EP is currently available. The band will play Nov. 30 at Club Moscow at Boardners in Hollywood, Dec. 1 at the Troubadour in West Hollywood and Dec. 4 at King King in Hollywood. For more information, visit www.monstersarewaiting.com.