The Joy Formidable: March 21 @ The Fonda 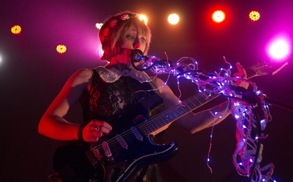 Whoever said that girls couldn’t rock? Don’t tell that to Ritzy Bryan.

The Joy Formidable lead vocalist and guitarist can shred with the best of them — male or female — all while charming an audience with her spunky, yet quirky behavior.

Last night in L.A., Bryan brought her “A” game to the Fonda Theatre as the Welsh alt-rockers delivered one head-banger after another during a riveting performance that featured openers Guards and Fort Lean.

With the release of its second full-length album earlier this year, The Joy Formidable are at the beginning of a 48-date North American tour that started last week in Austin at South By Southwest.

Since then, Bryan and her cohorts — bassist Rhydian Dafydd and drummer Matt Thomas — have made their way west and continued to play with the same kind of firepower they exhibited almost three years ago on their debut EP, A Balloon Called Moaning.

But at the Fonda, it was all about The Joy Formidable’s latest work in the studio as it played more than half of Wolf’s Law over the course of 90 minutes.

Opening with hit single “Cholla,” the trio transitioned back and forth between new and old material as Bryan traversed across the stage and swung her Fender Stratocaster in every direction. After all, the petit blonde doesn’t know any different.

Because if you’re seeking a real rock show in today’s electronic-heavy music scene, look no further than The Joy Formidable. Not only can this band answer that call, but it can also pass it with flying colors.

As much as fuzzed-out classics like “Austere” and “The Greatest Light Is the Greatest Shade” can shake crowds time and time again, the ferocity Bryan and her band mates display on newer tracks such as “Tendons” and “Forest Serenade” proves that this isn’t a band in danger of experiencing a sophomore slump.

Of course, there isn’t only one side to The Joy Formidable, and it made that point known as Dafydd’s acoustic guitar backed Bryan’s vocals on the poignant, heartfelt “Silent Treatment” midway through its set.

While some fans may have used those three minutes as an opportunity to buy another drink from the bar, the song would prove to be a nice escape from the hair-raising rock we would hear the rest of the night.