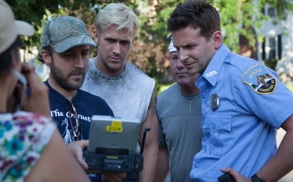 When you go to see a film that stars Ryan Gosling, Bradley Cooper and Eva Mendes, it’s hard to have your expectations exceeded since they’re already so high. However, The Place Beyond the Pines goes far beyond what is expected.

Directed by Derek Cianfrance, who also co-wrote it, the film takes place in Schenectady, N.Y. and follows Luke (Ryan Gosling), a mysterious stunt motorcycle rider who attempts to win back a former flame, Romina (Eva Mendes) after he finds out she had his baby.

Luke realizes Romina wants a steady income to provide for their family, so he decides to quit the carnival and rob a series of banks. That is when he enters a cat-and-mouse game with new police officer Avery Cross (Bradley Cooper), who is part of a police force riddled with corruption.

The Place Beyond The Pines goes beyond the surface of controversial topics, and the story does not fall into the basic crime-action film genre. Cianfrance spoke with Campus Circle about the film's direction and working with the actors.

Campus Circle: Throughout the movie there are a lot of unbroken shots that really force the audience to be in uncomfortable situations with the actors. Can you tell me about that?
Derek Cianfrance: I feel like there’s a truth in an unbroken shot. It is so much more difficult to do an unbroken shot. When we’re doing some of the stunts in this movie, my reference wasn’t other movies; it was “America’s Wildest Police Chases” or “COPS.” I wanted it to feel visceral and to feel like you were in the cop car while they’re chasing. What that meant was you’re going to know when they’re going 35 and when they’re going really, really fast. We had to go to dangerous places with the crew, with stunt drivers, with Ryan Gosling. There’s certain takes where he has to go out on a motorcycle, blow through an intersection and avoid 35 other cars in a single take. Not only for the stunt scenes but also for the emotional scenes, there’s not this cushion of an edit.

CC: You took part in writing the script as well as directing it. Did you have an idea of what kind of movie you wanted this to be when you began writing it?
DC: Ever since film school, I had wanted to make a triptych movie. I always wanted to make three-part story, but I didn’t know what it was. And then when my wife was pregnant with our second son, I was thinking a lot about legacy and all the things I was born with and all the things I was going to pass on to him. I was thinking how I wanted him to come into this world clean, and the story became very clear to me: I can make this triptych film based on this idea of legacy and the passing of the torch between generations. I have to say in my initial thoughts I knew the structure and the story. But I thought it was going to be more of a western, and then my co-writer, Ben Coccio, said let’s make it modern. Let’s use motorcycles instead of horses, and there’s where it all came. We thought we could tell a really personal, intimate family drama with a crime drama as the outer shell.

CC: This is your second time working with Ryan Gosling. How was the relationship working with him different than when you worked with him on Blue Valentine?
DC: Well, he’s a magic person; we had immediate trust when we met each other five years ago. If anything, we were just trying not to repeat ourselves, make sure we were going to those vulnerable places on this film and really experiencing it. That’s the thing – when I make my film, they’re real experiences for the actors.

CC: You’ve mentioned that on set you like to let actors run with their emotions and have real experiences. What were those scenes in The Place Beyond the Pines?
DC: The first time Bradley Cooper wakes up in the hospital bed. Basically, I set the camera on the other end of the hospital, and I made him stay in the hospital bed all day, made him pee in a bottle. If you notice in the scene a bottle of Bradley Cooper’s urine next to him, it’s because he couldn’t get out of bed. When we did this scene with his father and his baby coming to wake him up, he was just there, in the moment.
In terms of Ryan, he had called me before shooting and said, “D, how about we do the most tattoos in history?” I said, “You want tattoos? Ok." He said, “Yeah, and I want to get a face tattoo, and this one’s going to be a dagger, and it’s going to be dripping blood.”

…Then, we’re in the middle of shooting, and he comes up to me and says, “I think I should take it off. I think it’s too much.” I said, “No, this film’s about consequence, and you’re going to live with the consequence.” All of sudden, he was going into these scenes feeling not cool, but ashamed.

We have the baptism scene with all these people wearing what you wear to church: nice clothes. They’re all looking nice, and I tell Ryan to come into the church and find a place to sit, and he has no place to go, so he goes over to the corner. He’s literally a marked man; he can’t fit in. He’s marked with all these bad choices, and he goes in and sits down, and it was written that he was going to get enraged as he watched his son get baptized. But all of sudden, he was trembling. He wasn’t enraged; he was mortified. He was trembling and devastated by all of his choices, and he started to cry. That’s what we were doing. We were trying to get to a place where acting stops and behavior begins, and I think the film is pretty much filled with scene after scene of that.

CC: How did you decide on Eva Mendes?
DC: She was great. I didn’t know I was going to cast her. Ryan actually suggested I should audition her, and I said, “Yeah, I should have thought of that.”

She came to an audition wearing no makeup and baggy clothes, trying her hardest to be unattractive and miserably failing. But it meant so much to me that she was doing that.

I told her she didn’t have to read with me that day, and we just drove around Los Angeles. She showed me the neighborhood where she grew up, her elementary school, and I got to know her as a human being and really fall in love with her as a person. I’m always trying to find a place where an actor and a character can collide, and I felt like I could trust her. She definitely had some fears about the film, but I don’t relate to actors that are fearless; I relate to people who are scared. I could feel her fear and her courage, and then you have this incredibly conflicted character on screen. It was a gift working with her.

The Place Beyond the Pines releases in theaters on Friday, March 29. For more information on the film, click here.