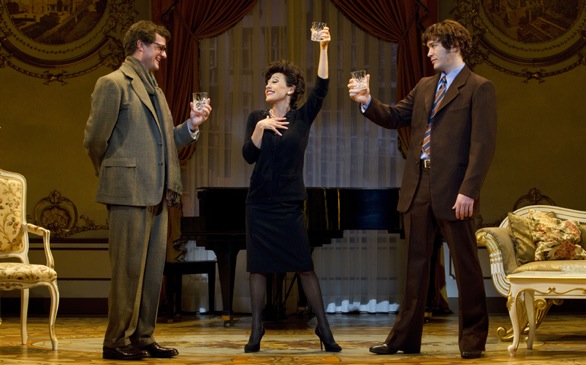 In fair London where we lay our scene – Judy Garland is our Juliet, and she dies for the stage, her Romeo.

For anyone familiar with the life of Judy Garland (born Frances Ethel Gumm), she was never granted any solace with the fame and fortune she found following her iconic role as Dorothy in The Wizard of Oz. Instead, she became a troubled artist, plagued with constant debt and addicted to pills and booze. Leading a sad and often lonely life, she married five times, never finding the love she so desperately desired.

"End of the Rainbow" stars Tracie Bennett as Garland now through April 21 at the Ahmanson Theatre. Set in the three months prior to her death in 1969 at the unsettling age of 47 years young, the musical drama written by British playwright Peter Quilter winds and weaves its way through Garland’s supposed psychosis at the end of her life. She was (and is still through Bennett’s transcendent performance) a neurotic and depressed woman with the energy of a lightning bug and the attention span of a gnat.

Our Judy is preparing for a five-week engagement at London’s The Talk of the Town. She’s broke and forced to play coy games with the manager of the Ritz Hotel in order to avoid payment. Her manager and fiancé, Mickey Deans (Erik Heger), tries his best to keep her in line, while friend and pianist Anthony (Michael Cumpsty) provides some comic relief and reminds us of Garland’s role as a gay icon (“the Elvis of homosexuals” as once printed by The Advocate). In many ways, she was a camp figure whose struggles mirrored those of gay men in the 1950s, 1960s and every decade thereafter.

On stage, the action predominantly takes place in Garland’s suite at the Ritz, though we are granted several musical numbers when her band breaks through the walls to reveal her Talk of the Town stage. These aren’t numbers you’d see in most others musicals – they are sobering and, at times, desperate. Garland used this run of shows to cling to her superstardom, but her addictions and delusional psychosis overcame her eventually.

Clumpsty is endearing, never over acting but always maintaining a good sense of character, mingling the right amount of humor and dejected rationality. Alternatively, Heger is loud and obnoxious, delivering each line with too much volume and less genuine emotion. Thankfully, he is not the star of this production, which does not suffer fully from his performance. Instead, we are captivated by William Dudley’s set and costume design – being trapped in a hotel room has never felt so good.

It is Bennett, however, that steals the show. She flits across the stage, over prop couches and onto pianos, never once stopping for breath except to breathe life into an icon we’ve thought dead for more than 40 years. Her timing and air are impeccable, and one can’t help but feel overwhelmed by her onstage presence – as if Garland has risen from her grave and donned her scarf and microphone for one last run.