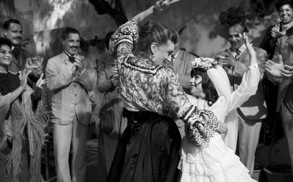 A breathtaking homage to the Golden era of silent black-and-white European cinema, Blancanieves is an extraordinary re-telling of the classic Brothers Grimm fairytale Snow White that takes place in a romanticized 1920s Spain.

In this uniquely set film directed by Pablo Berger, Snow White (or Carmen) is the daughter of a famous bullfighter who lives under the tyrannical rule of the venomous, evil stepmother Encarna (Maribel Verdú). Initially shunned by her father after her mother’s death, Carmen is raised by her grandmother. When her grandmother passes away, however, she is forced to move to her father’s estate. This begins a reign of terror that her stepmother unleashes on her.

The film is quite sad, but there are some wonderful shots. For example, there is a scene where Carmen’s communal dress is thrust into a bucket and comes out white, symbolizing the end of the child’s happiness. Encarna makes sure all of Carmen's days are filled with labor and tries to prevent her from seeing her father. However, this attempt is in vain as the child figures out she can sneak in to see her papa when Encarna is busy.

Following the lore of the fairytale, a grown-up Carmen (played by Macarena García) escapes after an attempt on her life has been made, and she joins a troupe of bullfighting dwarves – yes, bullfighting dwarves. They take her in as she follows her father’s legacy and give her the moniker Show White.

The dwarf bullfighting scenes are classic vaudeville funny, and it’s adorable when they go on the road as Snow White and the seven bullfighting dwarves. While the merry band travels around the countryside, Snow White draws attention from talent managers that recognize her bullfighting talent as well as her natural beauty and contract her for a match at the very arena of her father’s fame.

When the stepmother finds out about Snow White’s bullfighting escapades, the tale’s thrilling conclusion unfolds with a bullfighting match. It will leave the reviewer quite unsettled, but audiences will still able to see the beauty in it. The ending is quite different than the tale we all know and is in fact quite jarring; it will definitely be the topic of conversation as audiences clear the theater.

This piece of modern cinematic art should definitely help usher in a resurgence of classically filmed pictures much like 2011’s The Artist. Blancanieves’ cinematography of the Spanish countryside is incredibly lush and captures the look of the original films of those times. All of the actors in the film portray their emotions excellently, paying tribute to the greatest actors of the silent film-era. And not to mention, the incredible use of Spanish folk music and sideshow-esque compositions completely enhanced the film’s overall feel.

There are moments of joy, slapstick humor and even heart-wrenching scenes that truly affect the viewer emotionally. This is something that many current movies lack.

Blancanieves releases in select theaters around the country on Friday, March 29. It will release in L.A. at the Sundance Sunset in West Hollywood and Laemmle's Royal in West L.A.  For showtimes, click here.