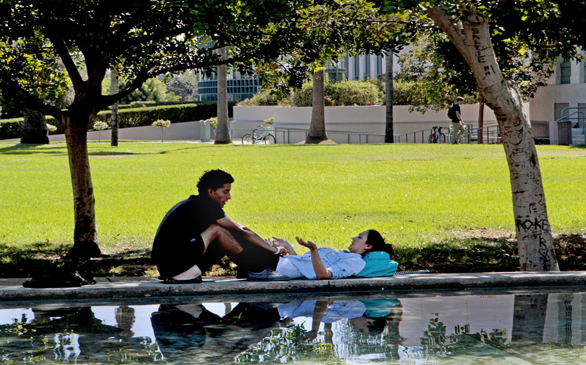 California's community colleges - the nation's largest public higher education system - have lost so many teachers and classes that students are being driven away.

With the number of course sections down systemwide by as much as 20 percent since 2008, enrollment rates have hit their lowest point in two decades, concludes a Public Policy Institute of California report released Monday.

The community colleges' ideal of open access for all, still dear to many Californians, barely resembles the reality on campuses today after years of budget cuts.

"I expected to get the classes I needed, but I was wrong," said Rigo Navarro, a second semester student at Chabot College in Hayward. Navarro wants to major in criminal justice and engineering but said he has yet to find space in a math or a criminal justice class.

Alexandra Olivares, 18, had it even worse, at least at first. Every class she tried to take in the fall at Chabot was full. She cried as she joined wait lists, thinking she would have to delay her career and find a low-wage job. Eventually, she got in.

The problem can be especially acute for those beginning their college careers, such as Olivares and Navarro, as they often must wait to register until after returning students have a chance.

The number of young, first-time community college students in California fell even further behind the number of recent high school graduates between 2008 and 2011 - a trend that, combined with lower California State University and University of California enrollment, "does not bode well" for the state's workforce, the report's researchers concluded.

Even though voters last year approved a tax hike and the governor wants to infuse the schools with an additional $210 million, the report authors say that's far from enough.

The state and the colleges must come up with a long-range plan to restore the system, whether through increased state revenue, local parcel taxes or student fees, the authors concluded. The report also listed online education and larger classes as possible ways to reach more students. A bill introduced this month by State Senate Pro Tem Darrell Steinberg, SB 520, would allow public college students shut out of classes to receive transfer credits for some online courses offered by the private sector.

"The saddest thing of all, for me, is that the one magnificent system that was open to all Californians has begun to ration what it can and cannot do," said Rita Cepeda, chancellor of the San Jose-Evergreen Community College District.

Statewide, the number of for-credit classes fell by 14 percent between 2008 and 2011; the number of noncredit classes, such as English-as-a-second-language, dropped by more than one-third. The noncredit decline is noteworthy, as the governor wants to make the colleges responsible for teaching ESL and other adult education classes now offered by K-12 districts.

Since 2010-11, Chabot has closed about 12 percent of its classes, including some sections of the popular mass communications course.

Last semester, class instructor Chad Mark Glen tried to ease the damage, letting in every student who tried to register for his introduction course. The cap was 44 students, but he invited more than 90 into a little lecture hall - basically, packing two sections into one. Students sat on the floor and poured into the hallway.

Glen said the class was vibrant and fun to teach. It was also draining. This semester, he said, "I told my dean, 'Put it back to 44.' I just felt I couldn't do it again."