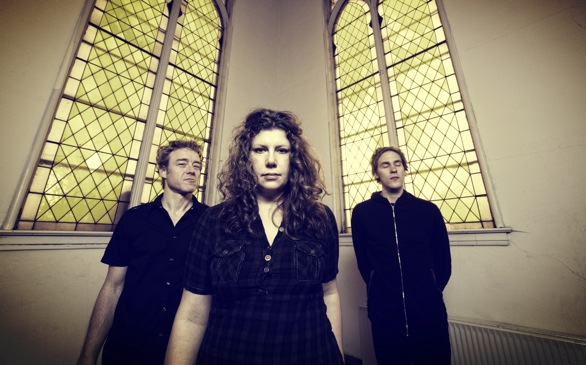 Low will be performing in L.A. on April 2.
(Credit: http://chairkickers.com)

These days, it’s almost unheard of for bands to maintain two years of steady success. Fifteen minutes of fame have maliciously shrunk to nanoseconds, due to waning attention spans of music consumers and the omnipotence of social media. But for a band to celebrate its 20th anniversary in such a sonic-speed environment is something of a miracle.

Why has the Duluth, Minn. trio Low withstood the test of time and the unforgiving tundra of Internet blogging? As singer and guitarist Alan Sparhawk supposes, it’s because they keep it simple.

The beautifully scaled-back collection was written during summer 2012 and brought to the Loft recording studio in Chicago in the fall, with Wilco front man Jeff Tweedy in the producer’s chair. Though it was Low’s vision to maintain restraint on The Invisible Way and let the songs speak for themselves, Sparhawk credits Tweedy for keeping his band on task.

“Getting back to the whole minimal, keep-it-simple thing, there were a few times when we were feeling like, oh, we should add another guitar, or maybe we should have even more vocals going on here,” Sparhawk recalled in a phone interview with Campus Circle. “Jeff was really good about reminding us to be more on the side of keep it simple.”

“It’s loosely based on a friend of ours who was arrested and going through probation, and the whole process of dealing with being caught growing and selling marijuana,” the singer explained. “It’s touching on how it turns your life upside down. Then the song starts backing away and looking: Ok, well, what about the whole idea of this law and how silly it is? What is the legacy of what is happening here?”

When asked about Low’s own legacy, Sparhawk paused and muttered a string of “I don’t know’s.” It’s a humbleness that seems to surprise even him, a self-admitted “Type-A big brother.”

“… I’m the oldest of five,” he said. “I’m a very on-edge-sometimes person, probably not always the easiest to work with.” The humility could also be a testament to his lifelong belief in the Mormon faith, a trait he and Parker carry with them into their creative process.

He emerged from his pondering and lists off Low projects that are dear to his heart: “I think it would be cool to put… a couple of our records in there— the Christmas record and a few different things, a recording of Robert Plant covering a few of our songs…maybe a picture of us with John Peel, maybe Mim’s brushes.”

That’s right: The Led Zeppelin shouter paid homage to Low with not one but two covers (“Monkey” and “Silver Rider”) on his 2010 album, Band of Joy. That’s no small feat for a group that recognizes its “outsider, underdog” status, depending on quietus to convey its message in a loud, brash world. This is the same trio that, in its early days of playing in bars, would turn down the amps in order to recapture the attention of unruly crowds.

Perhaps Low’s longevity can be attributed to the abnormality of being normal in a weirder-is-better music era. Sparhawk and Parker devote much of their non-touring time to raising their two children, ages 13 and 8. In speaking with the proud papa about an average day in their household, it sounded like any suburban family, minus the afternoon jam sessions between husband and wife. Add in Garrington’s “easy-going” nature, as Sparhawk said appreciatively, and you get the placid world of Low: low on drama, high on soothing, though-provoking songs.

Low plays the Troubadour on April 2.