It's All or Nothing for the Dodgers 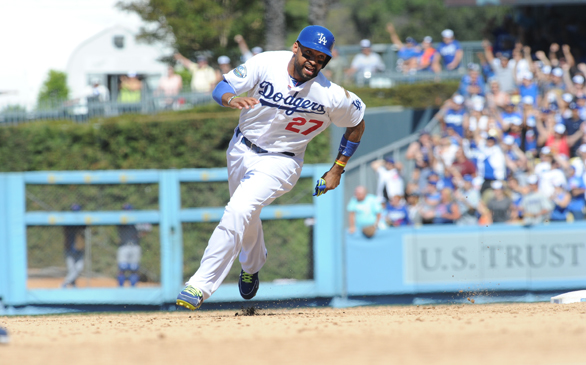 Matt Kemp must have an MVP-type season for the Dodgers to even begin thinking World Series.
(Credit: Jon SooHoo/LA Dodgers)

In order for the Los Angeles Dodgers to call this 2013 season successful, they must at least reach the World Series. That’s a must, and Matt Kemp must lead that charge.

Guggenheim Partners, LLC purchased the Dodgers for a little over $2 billion in 2012. Since then, the management group that includes Guggenheim controlling partner Mark Walter, former Laker Magic Johnson and partners Peter Guber, Stan Kasten, Bobby Patton and Todd Boehly has done its shared to bring a winning team to L.A. – a city that hasn’t witnessed a championship since 1988. That’s too damn long!

“I think they’re going to do fine,” he said in mid-March, according to the Ventura County Star. “I have great respect for Mark Walter, the CEO of Guggenheim. He’s responsible not only for Guggenheim, he’s responsible for the ballclub. He has an extraordinary vision. They’re doing it for good reasons, for the long haul…

“They’ve got good management. Stan Kasten is a proven, successful sports executive. Magic, with his visibility, he will not let the fans down. There’s no chance that Magic will do anything that would disappoint the fans…it’s an excellent combination.”

Last season, the Dodgers not only acquired shortstop Hanley Ramirez (currently out for eight weeks due to thumb surgery) and his salary from the Marlins in exchange of prospects, but also took on $260 million in payroll obligations from the Boston Red Sox in a trade for Adrian Gonzalez, Carl Crawford, Josh Beckett and Nick Punto.

“I feel like the people we got are people we should be able to count on as a core group of players for a long time,” CEO Mark Walter said, as reported by ESPNLosAngeles.com back in October 2012. “We got a good young first baseman who happens to be about the same age as the guy in right field, and shortstop, and center field.”

That was supposed to be their off-season in acquiring free agents, reported several media outlets. Acquisitions didn’t end there.

The new ownership, however, added top pitcher Zack Greinke and Korean left-hander Hyun-Jin Ryu, among other signings. As of now, the Dodgers have a surplus of starting pitchers, eight to be exact: Clayton Kershaw, Josh Beckett, Chad Billingsley, Aaron Harang, Chris Capuano, Greinke and Ryu. And it’s a good idea they haven’t traded anyone because Greinke recently experienced pain in his right elbow, while Kershaw and Billingsley underwent injuries late last year. On top of that, Ryu isn’t a lock since he’s yet to pitch in the majors.

“I’m just doing what’s laid out, to give us the best chance,” said Greinke, according to Yahoo! Sports. “On our team, we have other starting pitchers, and we have to be ready.

“I just want to do what’s best for the team. It’s not important what day (I pitch),” he added.

Despite all of that, the starting and relief rotations should perform above par if health permits. The fact of the matter is if Kemp performs as the MVP-caliber player he was in 2011 (when he should’ve been named National League MVP, not Ryan Braun) and early 2012, the rest will follow. And by that, I mean Gonzalez, Ramirez (once he returns from his thumb injury), Andre Either, Carl Crawford and the rest will perform.

Crawford, who was a standout when with the Tampa Bay Rays, underwent Tommy John elbow surgery during the offseason – two days after being acquired by the Dodgers. He feels good thus far.

“It’s just nice to be back,” he said after his appearance March 17. “I felt good. But my nerves were racing a little bit.”

He’s hopeful in returning by Opening Day (April 1) against the Giants at Dodger Stadium.

“I’m definitely trying to make it back by opening day,” he said. “It’s something I’d like to do.”

Once Crawford makes a full recovery, look for him to contribute solidly for the Dodgers – particularly with Kemp guiding the way in the outfield and batting line up.

In 2011, Kemp batted .324 with 39 homers and 126 RBI, while scoring 115 runs and amassing 195 hits. He also registered 40 stolen bases and 74 walks. We should expect this type of prolific production out of Kemp for this campaign. And if that’s the case, the rest of the squad will follow.

Kemp is not only the vocal leader of the Dodgers; he’s also an emotional character and the franchise player – though Cuban prospect Yasiel Puig (who hit well over .500 this spring) might challenge that in a couple of years.

Puig is at the stage of being polished into a major leaguer. He’s quick, fast, strong and built like a football player, but he’s now the Dodgers’ top prospect. Interestingly enough, a lot of folks project Puig to see action at the top level this season.

And if the Dodgers do make the playoffs and Puig continues to be hot, he could very well be a substantial contributor in all areas, especially in hitting.

For the Dodgers, it’s now or never. Management, coaches and players must sport that mentality. The talent and experience are there. The health is coming. With the right mental approach, this Dodgers squad could go distance.