With the Signing of Josh Hamilton, Will the Angels Fall or Fly in 2013? 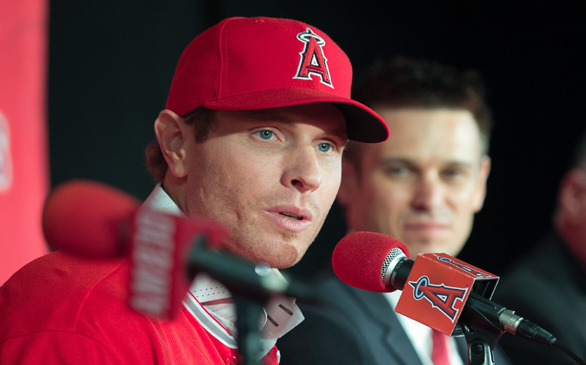 It’s just about that time of year again in Southern California; the sun is setting later, the days are getting warmer and most importantly, baseball season is rapidly approaching. With spring training wrapping up and regular season inching closer each day, all eyes are on the Anaheim Angels.

Dropping from second place to third last season in the American League West, owner Arte Moreno knew he needed to make a big move, and did he ever. The 2013 Angels are not only home to AL Rookie of the Year Mike Trout, but they welcome 2010 AL MVP Josh Hamilton to the team as well.

With Trout, Hamilton and Albert Pujols in the line-up, Halos fans have quite the season to look forward to. These three players alone have the potential to produce catastrophic numbers. Throw Mark Trumbo’s power into the mix, and the line-up is already deadly.

The newly signed Josh Hamilton is coming off this past season with the Texas Rangers, carrying a .270 batting average, 22 homers, 59 RBIs and 18 stolen bases. The outfielder will be calling Angel Stadium home for the next five years after turning down the Rangers qualifying offer and signing for a five-year, $125-million contract with the Angels. If all goes well, he will be a major asset both on the field and in the batting line-up.

Hamilton is definitely the most-discussed addition to the Angels’ roster this season, but that’s not to overlook the remaining new faces. The pitching staff will welcome Jason Vargas, Joe Blanton, Sean Burnett, Ryan Madson and Tommy Hanson.

Madson was brought on to be the Angels’ closer, but elbow complications may stop that from happening. He underwent Tommy John surgery last year and was planning on being back for opening day this season, but that is highly unlikely at this time since he’s suffered a setback.

Hanson’s velocity drop could be a reason for worrying, and although they have a mass quantity of pitchers, that doesn’t always mean results.

The Angels face a similar situation this year as they did in 2012, looking for a No. 2 hitter now that Torii Hunter is gone. However, let’s hope for their sake someone transitions into that spot soon and can be as clutch as Hunter.

Producing sensational numbers during his rookie season in the major leagues, Trout is nothing short of a force to be reckoned with. Leading the majors with 129 runs and 49 steals, Trout also hit .326 and had 83 RBI’s and 30 home runs. He will be transitioning from center field to left field, but we should expect to see him switching back and forth throughout the 2013 season.

Although Pujols has a season under his belt wearing the Halos jersey, not many were impressed with his performance last season. After straining his right knee in late August 2012, his abilities were limited in play, causing his averages to be unimpressive compared to his past years. Pujols underwent arthroscopic surgery on his knee in October, which will hopefully bring him back to his full potential at bat. He has been mildly participating in spring training and should be ready to play by the season opener.

Though the Angels have some notable gains for their upcoming season, they have also lost a handful of key players. Hunter has moved to Detroit and won’t be there to bring in RBI’s along with Kendrys Morales (traded to the Seattle Mariners), and pitchers Ervin Santana (now with the Kansas City Royals), Zach Greinke (signed with the Los Angeles Dodgers), Dan Haren (signed with the Washington Nationals) and Jordan Walden (traded to the Atlanta Braves) all put down the Angels jersey.

With such a big transition of pitchers, the rotation is looking a bit questionable. Of course, Weaver will continue to be the No. 1 starter, but the remaining rotation starters can’t be determined until they are thrown into play. Baseball fans didn’t see the C.J. Wilson they were used to seeing last year and, on top of that, he had elbow surgery in the off-season.

Also, it should be interesting to see how 2013 plays out in the bullpen, since many have question the Angels’ relief pitching.

As usual, the Angels have both positive and negative aspects on their 2013 roster, so ultimately the outcome could lean either way. This season, just as any other, really rides on which players stay healthy and which perform to their highest capability.

More likely than not, the Angels will have a successful year in 2013. Their season opener is Monday, April 1 in Cincinnati, Ohio against the Reds at 1:10 p.m. PST.