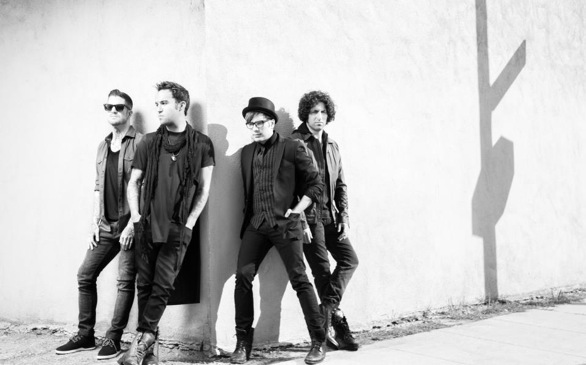 Fall Out Boy has a new album out on April 16.
(Credit: Pamela Littky via Facebook.com/falloutboy)

Spring is here, and new music is turning up everywhere! Here are a few new releases you don't want to miss:

Crime & The City Solution American Twilight (Mute) – This band has seen countless line-ups over the years but original member and leader Simon Bonney has a winner on his hands this time; one listen to the woman-exalting “Goddess” will have fans bowing down in praise.

Lapalux Nostalchic (Brainfeeder) – Lapalux (aka Stuart Howard) has the distinction of being the only British artist signed to L.A.-based Brainfeeder. He won the label over with his lopsided electronica; check out the experimental beats of “IAMSYS” and the woozy “Guuurl” and you’ll likely be intrigued too.

Lil Wayne I Am Not a Human Being 2 (Young Money) – The highly-anticipated IANAHB2 is finally here; hopefully the rapper’s health problems will abate so he can fully celebrate the new music. Among those making guest appearances are Soulja Boy, Nicki Minaj, Dre, 2 Chainz, Boo and Juicy J.

The Milk Carton Kids The Ash & Clay (Anti-) – This L.A.-based duo has “Snake Eyes,” “The Jewel of June” and this album’s title cut featuring in the new Gus Van Sant-directed film Promised Land.

Mwahaha (Self-titled) (Plug Research) – The band released this album on their own last year and subsequently built a cult following with their mash-up of experimental electronica, twisted psychedelia, wall-of-sound pop washes and lush vocals; the cult is bound to grow thanks to this reissue.

Phosphorescent Muchacho (Dead Oceans) – Phosphorescent (Matthew Houck) previously put out an album that was a tribute to Willie Nelson and here with songs like “Song for Zula” he offers his take on spaced-out Americana: a combination of traditional country and mind expanding desert rock.

Justin Timberlake The 20/20 Experience (Tennman) – Clearly it’s going to be JT’s year; a promotional blitz for the new album saw Timberlake hosting Saturday Night Live, spending a week as special guest on Late Night with Jimmy Fallon, having the album streamed for free on iTunes and having his record release party aired on the CW. Just wait until his summer tour with Jay Z begins.

Yard of Blondes Murderology (High Desert Lo-Fi) – Vincent Walter Jacob and Fanny Hill, the creative minds behind Yard of Blondes, are both originally from France. There’s nothing continental about Murderology though; the band now lives in L.A. and the tunes on this debut four-song effort have a definite bent towards stoner rock.

The Besnard Lakes Until in Excess, Imperceptible UFO (Jagjaguwar) – Pink Floyd for the 21st century, minus the angst.

New Kids on the Block 10 (The Block) – Donnie Wahlberg is busy playing a cop on TV’s Blue Bloods but not too busy to reunite with Joey, Danny, Jordan and Jonathan for this comeback album.

Rilo Kiley Rkives (Little Record) – This much beloved band hasn’t popped with new music for six years and they don’t here either; Rkives is a compilation of B-sides, rarities and oddities.

Spock’s Beard Brief Nocturnes and Dreamless Sleep (Inside Out) – This outfit remains one of prog rock’s most inventive; here their sound is tweaked a little bit by a new vocalist.

TokiMonsta Half Shadows (Ultra) – Toki’s psychedelic take on hip-hop and electronic dance music has made her the latest club darling.