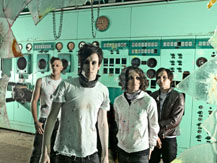 Untitled Document Living in LA, sometimes it seems like you can’t escape seeing an American Eyes show on the Troubadour marquee or on the giant Key Club video screen looming over Sunset Blvd. at least once a month. Things are going to change though. Having just released Never Trust Anything That Bleeds, their debut EP on Side One Dummy, the band is poised to hit the road and visit every other city it possibly can.

"A lot of people when they get deals are like, ‘Oh my god, it’s all set.’ Being on an indie label just means, hey our release date comes out and we’re competing with 1,000 other people who are bigger than us, more established than us, just trying to get our name in stores. I feel like we did a good job getting our name out in LA, but for the rest of the world we’re competing against Radiohead, U2, just a whole new ladder to climb, an even bigger ladder, but I love challenges," remarks American Eyes frontman David Henry.

That determined and positive attitude permeates the entire band – made up of Henry on vocals, Brent Richardson and Michael Anthony on guitars, Tyler Johnson on bass and Oliver Gold on drums. Lifelong friends, Henry and Gold met when they were toddlers in Mommy and Me daycare and eventually went to same school as Richardson. Music was always a part of Henry’s household. He says, "Growing up if I wanted to play sports, my parents wouldn’t let me they were just like play music."

Richardson interjects, "That was totally opposite of me. My dad was a pro football player in the NFL! … When I was in high school a lot of my good friends besides Dave and Oliver were musicians, so it was something I just started picking up. Hang out with five guys that all play guitar all the time, the next thing you know you’re like, ‘Give me that, I can do that.’"

It was around this time that Henry and Gold were looking for another member to complete their band although, at the time, they were playing different instruments than they are now. Henry recalls, "I was playing drums, Oliver was playing guitar. Brent had just started playing guitar. He wasn’t that good, but we just said, ‘Fuck it. We’ll have him join and we’ll teach him!’ So, Oliver spent a year working with him and it seriously only took him two months to learn all the songs and just be able to rock it.

"That’s how it started: We were all playing different instruments. In a way, I helped Oliver become a better drummer. Oliver taught Brent how to become a better guitar player. It’s all a circular motion."

After adding Anthony and Johnson to the line-up, the band started spreading the word. From online message boards, chatrooms and MySpace, to putting fliers in every shop on Melrose Ave., to handing out CD samplers at local high schools and colleges – American Eyes was everywhere in LA.

Dates at Key Club began to sell-out, their MySpace friends list grew by leaps and bounds, they were added to two dates on last year’s Taste of Chaos and several dates of Warped Tour 2005. Even as their notoriety grew in LA, the five guys still maintained the same humility and approachablity that makes fans so attracted to them.

Henry states, "Almost every night I’m so appreciative every time we play and people show up and you see the same faces. I don’t know if people realize as much as it means to us because without them what would be we doing? Every time we play a show and I look out at those kids I go, ‘Wow we’re really lucky.’"

Growing up, Richardson remembers, "I enjoyed going to punk shows. I just loved the whole vibe of it – just a big party, everyone having a good time." Henry adds, "It was a scene." Richardson continues, "Yeah, exactly, a reason to get out of Agoura, come out and go do something different." This is exactly what American Eyes has accomplished. They, along with a handful of other local bands, have helped create an exciting and vibrant LA scene of their own.

Indeed, the Never Trust EP is full of emotion, a six-song concept album based on the turbulent roller coaster of a relationship gone bad. Henry explains, "It’s like coming of age. We’re all getting to that age where all our friends are like in their junior or senior years of college. They’re all starting their real life. That’s like one of the most dynamic changes you’ll have in your life – going from a kid basically to a young adult. It’s very overwhelming, a lot of people don’t even talk about it. But for me, as a writer, a lot of things went into this CD."

Henry was able to use personal relationships to connect with Tears for Fears vocalist, Curt Smith, and persuade him to sing one of the EP’s tracks called "The Day We Died." Henry states, "Curt’s such an amazing singer, it was great to have him on this project. It was surreal moment in my life."

When asked if you can never trust anything that bleeds, what can you trust? Henry immediately replied, "Yourself." That, coming from a band who has built its reputation for itself, who from its days promoting on school campuses and MySpace to selling out hometown shows and as they move on to national tours fully embody a do-it-yourself philosophy – isn’t surprising.

Never Trust Anything That Bleeds is currently available. American Eyes will play Dec. 5 at the Troubadour in West Hollywood and Dec. 31 at the Orange County Fairgrounds in Costa Mesa. For more information, visit americaneyesmusic.com.