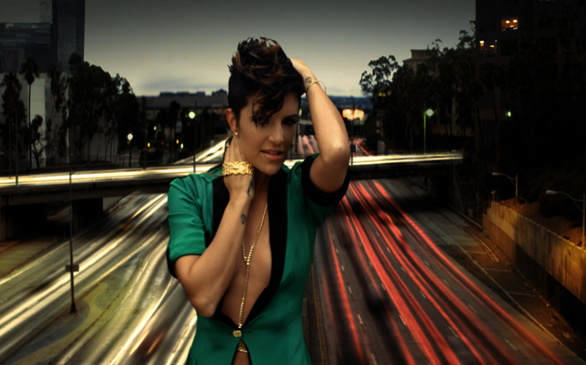 Sabrina Antoinette is a rising star in the pop rock music spectrum.

Singer and songwriter Sabrina Antoinette found her passion for music as a teenager. When she was 13 years old, her cousin passed away. She was asked to sing at the funeral and, from there on, music became her life.

Sabrina Antoinette's now signed under Chris Brown's label, Chris Brown Entertainment. Of late, she's being a hit with her debut single, "I Know You're Out There." She attained significant recognition as a featured artist on Chris Brown's Grammy nominated album, Fortune.

The pop-rock fusion rising act was born and raised in Texas, but she's now a resident of Los Angeles.

Campus Circle conducted a Q&A session with Antoinette via telephone. To no surprise, the humble artist didn't hesitate to answer any of the questions.

Sabrina Antoinette: I was about 13 years old. My cousin had just died, and they asked me to sing at her funeral, and I felt that just for that moment, I was doing something for my family. I realized that music touches people, and that’s when I got serious about what I’m doing.

CC: What have been some of your musical influences throughout your career?

SA: I used to be absolutely obsessed with Elvis (Presley), and I loved Michael Jackson. Now, I can’t pinpoint any one particular influence because music is so broad, and there are so many sounds. I definitely listen to sounds more, sounds that give me feeling.

CC: How important is fashion for you in transcending who you are to the public?

SA: It’s one of the most important things. When I find out I have an event or an appearance, I’m already thinking about what I’m going to wear. I think fashion is very important: nails, hair, all things you can do to express yourself and who you are, and I’m a bit obsessed with it…I also love working with fashion designers and coming up with things for my style and things like that. They’re noticing that I dress differently than most people, which I like. I appreciate it.

CC: How important is social media to you, and how does it help you keep in touch with your fans?

SA: I honestly think it’s one of the most important things you can do. We’re in an age of cell phones and texting. You can do an entire business deal through texts or email. It’s also important because it’s a way to let your fans know that you're listening, that you hear what they’re saying. I want to stay as connected to them as possible. I don’t think they want a robot who just posts things like, ‘come see me here,’ and then doesn’t talk to you. Even if I’m doing things, I’ll sit and go through messages and try to respond to as many as possible.

CC: What are the major differences between Texas and California?

SA: California has a lot of mountains and great weather. I love the fact that at any moment I want to do something or work on something outside, I can do that here. Texas is just hot, but I love the food – the Mexican food is amazing. But I honestly feel California is where I need to be. I love the energy here. Also, there are so many people who come here to do so many different things, and all the resources available here are more vast than in other places.

SA: It’s very important. For example at Christmas, we’ll have a big ham and turkey, and we’ll all make meatballs using my grandma’s secret recipe. But food is a major way in which our family gets together, and that’s beautiful. I don’t think too many families do that any more.

CC: Let’s talk about your single, “I Know You’re Out There.” Discuss your experience with composing the song and making the video.

SA: This has been a great experience. I had been working on my album and had been writing a lot of songs. One day I was with a friend and we were in between sessions, and he asked me if he could play a song for me, and it was that song. After hearing it, I thought this song was very special and asked if I could have it. We recorded it, and we thought it was amazing, and we decided this would be the single. A month later, we got together, threw some concepts around and started shooting the video. I couldn’t sleep the night before because I was so excited about shooting. We started very early in the morning, and the whole time I was running on pure adrenaline, and I was fortunate enough to have Chris (Brown) in the video.

CC: How did Chris Brown’s participation come about?

SA: Well, Chris normally likes us to be on our own and do our own thing, but he is always paying attention and was with us the whole time. And one day, we were at the beach, and we were looking at the final cut for the video, and he said, ‘You know what? I want to be in the video. Is that ok?’ I said yes. He put my friend’s leather jacket on and just made it happen.

CC: Would you describe Chris Brown as a sort of mentor? How has it been working with him?

SA: Yes, and I would say not just to me but to all of us who work with him as well. He’s influenced me so much. He practically changed the way I write. It’s difficult to describe what it’s like to actually work with him and see him create, and I thank him all the time for all that I’ve learned from him. He’s also very involved, and I feel very fortunate for all the freedom he gives you.

CC: Where do you draw your inspiration from when you’re writing songs?

SA: I definitely use personal experiences. It’s all drawn from my life, and I share it. I feel this way people can actually relate to your music because everyone goes through the same shit. And so everyone can always relate to something. Someone can always say, 'I went through that! That sucked!'

CC: What are some of your hobbies?

SA: Painting my nails, and I don't do a very good job of it…like right now, I’m trying to draw things on my nails, and I’m failing horribly…also messing with my hair. I love going out on the fly, not knowing what I’m doing, then a bonfire on the beach. I like seeing where life goes – randomness.

CC: What’s your favorite spot in L.A. to hang out or visit?

SA: I don’t know; there are so many places. The Griffith Observatory for one. I love the nature of everything. I like getting out and seeing things, but I don’t know L.A. very well.

CC: What advice would you give the youth out there who might want to follow in your footsteps and enter this industry?

SA: Don’t stop. There will be many people who will try and change you and your art, tell you that it’s wrong or that it should be done a certain way. You have to be yourself. A lot of people won’t get you, but all that matters is that you get you. So don’t stop. Take criticism constructively, but don’t let negativity get you down.

SA: Not necessarily add, but I would like to say that I’m very excited for this coming year. Also, check out all the other artists in our group who work with Chris. We’re all coming out this year, but everyone’s very talented.

Sabrina Antoinette performs on Friday, March 29 at The Foundation Room inside the House of Blues at 10 p.m. and on Friday, April 5 at Universal City Walk at 9 p.m. For more information, visit www.sabrinaantoinette.com.