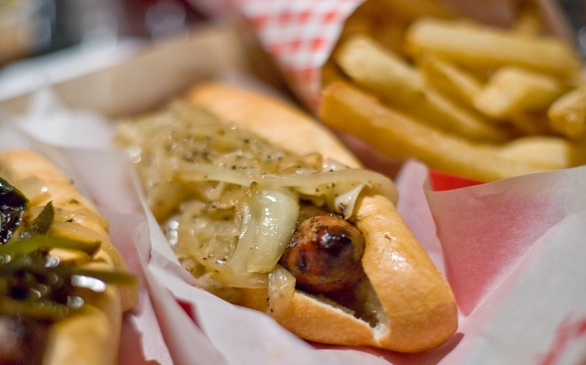 No, it’s not a Dodger Dog – but Wurstküche’s sausages are absolutely mouth-watering.
(Credit: Dylan Ho)

At a baseball game, nothing is better than a Dodger Dog. They are simply the best hot dogs to eat while admiring every hit, strike, foul, catch and out from the stands. However, if you can’t make it to the stadium for a game, go to Wurstküche to get your hotdog fix. Despite the fact that nobody seems to know how to pronounce the name of this restaurant (which means “Sausage Kitchen” in German), it has remained a downtown hotspot since it first opened in 2008.

What makes this place a grand slam? Firstly, they offer an excellent assortment of tasty sausages. They have a dog for everybody: Italian, Mango Jalapeño, Vegetarian Smoke Apple Sage, Kielbasa, and for the more adventurous types they have Crocodile and Pork, Rattlesnake and Rabbit with Jalapeños and so much more. Secondly, they have delicious doubled-dipped French fries paired with an assortment of dipping sauces like Chipotle Ketchup and Pesto Mayo. Thirdly, they have a wide selection of Belgian beers on tap. And lastly, the restaurant has a great atmosphere, equipped with biergarten bench-style tables and good-looking hipsters. Basically, as a restaurant, Wurstküche touches all four bases and knocks the ball out of the park.

Everyone knows that the “cheese” they put on nachos at baseball games is really just orange-died processed goo (or “queso” as some people call it), and there’s probably not even actual cheese in it, but who cares? That glorious orange goo is heaven to your taste buds and a pinnacle element of baseball cuisine. Unfortunately, most restaurants adorn their nachos with real cheese, which may also be tasty, but it just doesn’t have the same amount of character and pizzazz as the orange goo.

However, there is no need to worry because the Public House, a sports bar/restaurant in Los Feliz, is not like other restaurants. They respect the sanctity of the goo by offering an amazing plate of nachos topped with chicken or beef, Pico de Gallo, black beans, sour cream and their delicious version of nacho cheese.
Public House is also decked out with an overwhelming number of large, flat-screen TVs that are visible from the first and second floor, so you never have to worry about missing that amazing catch by the left fielder. Overall, this is the perfect spot to scarf down a delicious place of gooey nachos while watching the ball game.

Nothing gets you in the baseball spirit like the potent, mouth-watering scent of garlic fries that invades the air of the baseball stadium. And even though you know they will make your breath smell worse than Matt Kemp’s jock strap after a game, you simply cannot resist their garlicky seduction.
The best comparable substitute for stadium-made garlic fries in L.A. are the Spicy Sweet Potato Garlic Fries offered at Cole’s restaurant downtown. Warning: These garlic fries should not be consumed by people who are on a date, trying to hit on somebody, dating a vampire or going out on the town after the meal. Because after you eat these bad boys, with their spicy-sweet-goodness, garlic will start to seep through your pores.

Imagine a hot, sunny day at the baseball game. You’ve got on your cap, sunscreen and sunglasses. You’ve got your hotdog in your left hand, and everything seems right in the world. Except it isn’t…something very important is missing. Oh, that’s right – it’s your hefty, mega-cup of ice-cold Bud Light. How could you forget? A frosty beer at a baseball game is what brings all the other things you eat together. It washes down the hotdogs, garlic fries and nachos with the perfect harmony of carbonation, fresh taste and, of course, alcohol.

There are a handful of great places to find a tasty beer in L.A., but the one that sticks out in particular is Golden Road Brewing, where you know the beer is fresh because it is made on the premises. They offer 20 taps featuring their best beers as well as other intriguing options of craft beer from other breweries. For watching a baseball game, their Point The Way IPA is a great way to stay cool, with its zesty citrus flavors and light body. You can watch the game on one of their TVs, or sit outside in the hot sun, soaking up the beautiful day. Since the Golden Road Pub is situated right next to the railroad track, customers often cheer, shout and raise a glass whenever a train goes by and shakes the ground, giving the small pub the same amount of rumble and chaos as a stadium.

Special Features
We tried more than 25 alternative proteins. These were the best (and worst)
966 views