Vans Warped Tour 2013 to Kick Off Across America 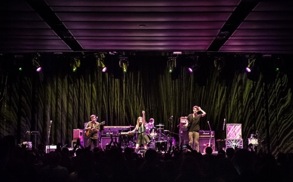 Polish off those Docs, slap on a fresh coat of black nail polish, and get ready to hit the mosh pit once again as Kevin Lyman and company bring us another rowdy ensemble of bands packed with adrenaline for Van's Warped Tour 2013.

Giving hardcore fans and longtime friends a little preview, Vans Warped Tour held a kick-off party hosted by comedian Grant Cotter (newly signed to SideOneDummy Records), which took place on Thursday, March 28 at Club Nokia located in the heart of Downtown Los Angeles. Many a punk rocker and rude girl were there for the evening to support and get a sneak peek of the bands hitting the stage and causing a riot across America this summer.

Cameras were flashing left and right for a glimpse of infamous Lyman (producer/founder) as he took to the mic with a handful of this summer's bands. After thanking everyone for coming and saying a few opening words, the audience was left with curiosity and an overall buzz in anticipation for the performances.

As one of the most notable music tours in rock ‘n’ roll history, Vans Warped Tour (best known as the “summer bootcamp” for many musicians on their way up the fame food chain) is never one to disappoint. Having been the sleep-away camp for many now famous bands such as Flogging Molly, Good Charlotte, MXPX, No Doubt, Green Day and Goldfinger, it's definitely the first priority and best bet for getting the scoop on the hottest new bands hitting the airwaves and making history.

Kicking off on June 15 in Seattle, Wash. at the White River Amphitheater, the tour will do its do-diligence for it's 19th year running, providing a plethora of new talent and old favorites. Demonstrating a variety of music at the kick-off party, bands such as Echosmith, New Beat Fund, Big Chocolate, Brian Marquis, Charlotte Sometimes and Chiodos performed small sets showcasing a variety of music: rock, indie, Goth, metal, acoustic and pop. Fans were pleasantly surprised and immediately smitten.

For your own chance to see Vans Warped Tour 2013 in action, the road show will be hitting California starting June 19 in San Diego with dates in Pomona and Ventura to follow thereafter.