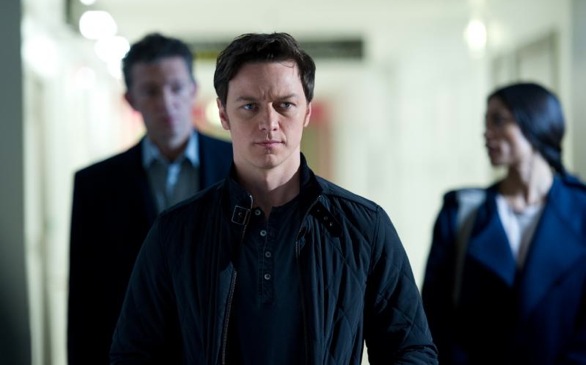 Hypnotism: it's something that’s often talked about, but seldom understood. In Trance, the new film from Oscar-winner Danny Boyle, we learn just how powerful the process can be.

In an effort to help the film’s main cast understand the process, a trained hypnotist was brought to London. There, Rosario Dawson, James McAvoy and Vincent Cassel were treated to their very own hypnotherapy sessions.

“We were all very much wanting to go under,” explained Dawson with a laugh. “But we were also very distracted, trying to see if anyone else had gone under. James had a moment where he couldn’t pry his fingers apart, but Vincent doesn’t believe it at all.”

Whether or not the actors were actually hypnotized, the film has no trouble entrancing the audience. Boyle takes a somewhat simple story and turns it into a brilliant masterwork - a skill other directors should take note of.

McAvoy plays Simon, who works at an art auction house. As it turns out, he has joined forces with several gangsters to steal a painting. Unfortunately, he is hit on the head during the process of stealing the painting, and this causes him to lose his memory of what he did with it. After trying to beat the answer out of him, Cassel’s character Franck hires a beautiful hypnotherapist named Elizabeth (Dawson) to figure out what has happened to the painting.

Among the many things that make Trance a great film, the greatest aspect has to be the cast. Never has a group of actors understood their characters so completely, and it shows on screen. There isn’t a single moment that they don’t fully sell, and it makes the viewing experience all the more enjoyable.

“It was really fun playing someone whose cleverness was her strength,” said Dawson of her character.

Where many female characters today use only their sexuality, Elizabeth uses her intelligence as her main weapon. Is there a point where she must use her body in order to achieve her goals? Yes, but there is never a single moment where she seems any weaker or less important than her male counterparts.

“The dynamic of power keeps shifting between the three of them, and I think that’s what makes it a really compelling film,” said Dawson. “You don’t have that obvious protagonist and antagonist back-and-forth. The sands keep shifting.”

When we are introduced to Franck, it seems that he is the typical one-dimensional gangster character. Obviously, he’s still pretty close to that since he decided to rip off Simon’s fingernails before hiring a hypnotherapist. Still, as the film progresses, his walls come down – he falls in love.

“I really think that Franck is actually the closest character to the audience. He doesn’t know anything. He doesn’t have to lie,” said Cassel.

Indeed, it seems the most truthful character in the film is the one you’d least expect. Everyone has their own agenda, but Franck isn’t hiding anything from anyone. Near the end, you actually may find yourself rooting for him.

Simon, who begins the film as the well-meaning protagonist, seems to have undergone the biggest transformation throughout the film. The audience wants to like him. But as the story progresses, more and more of his ugly personality is revealed.

Boyle has made it clear that he wanted the characters of this film to seem real. In everyday life, no one is truly good or evil in their own minds. Most people do what they think is the right thing, and that is what Trance so beautifully illustrates. You want to dislike certain characters so much for what they do, but in the end, can you? People make mistakes, and in the film, even the technical protagonist is far from perfect.

“You start off and think: ‘Okay, he’s [Simon] the reliable narrator guy!’ Then it begins to change. That’s what’s wonderful about this film and these characters - they’re not what they seem,” said Boyle. “It’s lovely to twist the characters around like that, and obviously James is the biggest example of that.”

On the surface, Trance is a kind of hybrid, spanning several genres, and it keeps the viewer in the dark for the majority of the runtime. The mystery is what makes the film feel so fresh in comparison to many other movies that have tried to accomplish the same thing and failed. Every time you think you’ve got the film figured out, it throws you for a loop.

It’s been awhile since a film was able to ensnare an audience in its story like Trance. The mystery makes it what it is. You can try desperately to understand it, but all you can really do is sit back and watch the story unfold.

Interviews
Ai Weiwei on activism in the US, his art response to COVID-19 and a secret Wuhan film
690 views

Interviews
James Bond producer: 007 ‘can be of any color’ but never a woman
1,903 views

Interviews
For Martin Scorsese, making ‘The Irishman’ was about ‘learning to die’
1,486 views