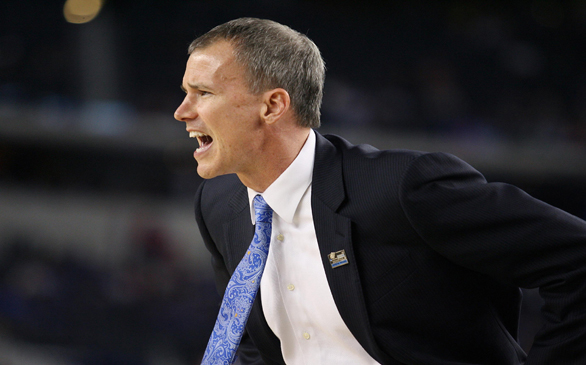 The University of Southern California's 2-month search for a basketball coach ended Monday when the school hired Florida Gulf Coast Coach Andy Enfield, who took the 15th-seeded Eagles to the Sweet 16 of the NCAA tournament last month.

USC spokesman Tim Tessalone confirmed the hiring of Enfield, 43, who has had an eclectic career in both business and basketball. His 2012-13 team became known as "Dunk City" for its high-powered offense, willingness to run the floor and proclivity for dunking on opponents.

Enfield's team captured the imagination of basketball fans across the country with its fearless play, particularly in a South Regional upset of second-seeded Georgetown in its tournament opener, before losing to Florida in the Sweet 16.

His wife Amanda, a former Victoria's Secret model, also got plenty of camera time during the Eagles' NCAA run.

This year's tournament appearance was the first for FGCU, when has been competing in NCAA Division I only since 2011.

The Eagles earned an NCAA bid by winning the Atlantic Sun tournament championship this year.

Enfield is a former assistant to Leonard Hamilton at Florida State and also worked for Rick Pitino with the Boston Celtics. As a player, he was the all-time Division III free-throw percentage leader, making 92 percent of his attempts.

At USC, Enfield succeeds Kevin O'Neill, who was fired in January, and interim coach Bob Cantu, who finished out the season. The Trojans finished 14-18 and lost to Utah in the first round of the Pac-12 Conference tournament in Las Vegas.

Enfield was making $157,000 a year at Florida Gulf Coast and reportedly has agreed to a six-year contract at USC. Financial terms have not been released, but two sources within the university said the deal will pay him more than $1 million a year.

But Haden had said he wanted a candidate who favored a fast-paced style of play and had Division I head coaching experience, qualifications that Enfield has.

His recruiting has been confined mostly to the East Coast but USC returns a roster that includes streak shooter J.T. Terrell and big men Omar Oraby and Dewayne Dedmon plus role players Byron Wesley and Ari Stewart. If Enfield can find a junior college point guard to replace senior starter Jio Fontan it is a team with some talent.

In a quote released by USC, Enfield said, "My family and I are thrilled to join the Trojan Family and be part of the unparalleled athletic tradition at USC. I'm looking forward to bringing an exciting, up-tempo style of play to USC and building the men's basketball brand into one the fans and basketball community will enjoy and respect."