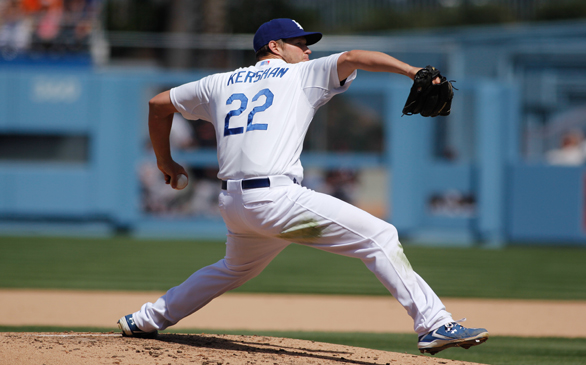 A sold-out Dodger Stadium saw Clayton Kershaw deliver a complete game shut out and hit a homer in a 4-0 win over the visiting San Francisco Giants in both team’s season opener on Monday afternoon.

Kershaw’s nine innings of complete work featured seven strikeouts as he allowed just four hits on 94 pitches. Some could say that was expected, but the unexpected occurred at the bottom of the eighth when he crushed a 414-foot home run over the center field wall.

It gave the Dodgers a 1-0 lead and a much-needed boost to find their offense.

Kershaw (1-0) didn’t hide his emotions during a post-game press conference.

“What an awesome feeling,” he said about the homer.

“I probably wasn’t feeling my feet hitting the ground,” he added.

According to Kershaw, the last time he hit a homer was during Spring Training four years ago. Before that, it happened in high school.

If there was ever any thought as to Kershaw receiving a contract extension worth more than $200 million, he certainly made his case on Opening Day – which witnessed Dodger legend Sandy Koufax throw the ceremonial first pitch.

The comparisons between Kershaw and Koufax were heard all around. Ellis made a memorable comment on both.

“It was almost like a passing-of-the-torch day,” he said of Koufax’s surprise appearance and Kershaw’s solid performance. “The first pitch by Koufax and the last by Kersh.”

For the Giants, ace Matt Cain pitched a solid six innings; he surrendered four hits and a walk while fanning eight. He received a no-decision. Offensively, the Giants really couldn’t do anything. Kershaw shut them down completely.

“That was a tough one, but Kershaw never gave us a chance to do much at all, and that’s typical of him and what you expect from him,” said Cain.

Despite the victory and brilliant tossing, 25-year-old Kershaw remains focus on the entire season.

“Opening Day was everything I could hope for,” he said. “Hopefully, we got 161 more of those coming up.”