A Blast to the Past at the Original Renaissance Pleasure Faire 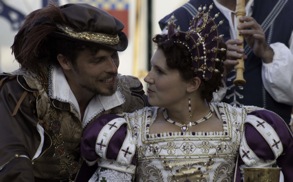 Queen Elizabeth and Her Fellow.
(Credit: Chelsea A. Virgilio via renfair.com/socal)

The Original Renaissance Pleasure Faire is a fair like no other. At no other fair will you get to experience the spirit of the Renaissance, a period in history when individuals celebrated the awakening of an idea.

Starting on Saturday, April 6 and lasting until Sunday, May 19 at the Santa Fe Dam Recreation Area, the Original Renaissance Pleasure Faire will allow visitors to experience the Renaissance period with artisans, entertainment, food, games, rides and so much more!

There will be activities for everyone and some are perfect for children, including the “Fools Maze,” “Funny Farm Petting Zoo” and “St. Cuthbert’s Children’s Crafts.” In addition, there will be a plethora of arts & crafts and costumes that will take you back in time to this cultural, historical period.

Renaissance enthusiasts should note that this year’s event promises almost a dozen new entertainment performances and shows. For example, “The Queen’s Show” will take place at the Maybower Stage where witnesses will watch England’s Queen Elizabeth get into a verbal sparring fight with the Duke of Norfolk – who will win the match?

Speaking of the Queen, fairgoers can also buy tickets to experience what it’s really like to have “tea with the Queen” in the St. Cuthbert Guild Yard. At 4 p.m., you can munch on scones, tea sandwiches and tarts as you sip on black tea with the Queen of England.

“Wolgemut” (an ancient Germanic word that means “to be in a good mood”) is a new show and is full of fun, humor and energetic music and dance - it’s literally like a Renaissance rock concert!

And if you’re in a singing mood (which we’re sure you will be at some point), the fair’s final performance occurs at 7 p.m. daily at the City Gates. Join the performers as they sing “Let Union Be” during the “The Final Huzzah!” You can read the lyrics and download the mp3 here.

Yummy culinary delights will be available at many booths throughout the grounds. A Fish & Chips booth will serve up all your favorite seafood combos: fish and chips, oysters and chips, calamari and chips, shrimp and chips, shrimp cocktails, oyster sliders and oyster shooters. You can also indulge in traditional English Renaissance staples like turkey legs, sausage, bread, cheese and more.

So, if you’re someone who appreciates culture and history along with good entertainment and scrumptious food (or if you’re just a total Renaissance/medieval buff), then the Original Renaissance Pleasure Faire is where you need to be.

The Original Renaissance Pleasure Faire takes place on Saturdays & Sundays at the Santa Fe Dam Recreation Area in Irwindale from Saturday, April 6 through Sunday, May 19. Times are from 10 a.m. to 7 p.m. To purchase tickets, cick here.