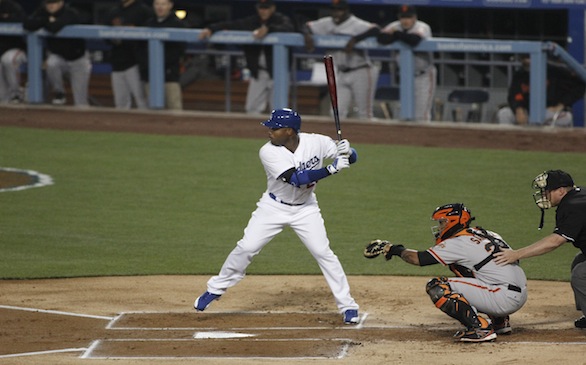 Carl Crawford went 3-for-4 and scored a run in the series finale against the Giants Wednesday night.
(Credit: Rafael Orellana)

For a second straight game, the Dodger offense was nonexistent against the visiting San Francisco Giants. L.A. suffered a 5-3 defeat as the NoCal squad captured the series with another win Wednesday night.

Pablo Sandoval finished the game going 1-for-4, but his lone hit was a two-run home run in the third that helped the Giants pull away from the Dodgers. They led 4-1 at that time.

Carl Crawford continued to impress. He went 3-for-4, walked once and scored a run. No other Dodger had more than one hit.

For the Dodgers (1-2), Josh Beckett received the loss after surrendering five runs (three earned) on six hits in six innings of work.

"He had a good camp and he's healthy, so we have no reservations about Josh," he said while also noting that Beckett pitched well for the team after being acquired from the Red Sox late last season.

Aside from Sandoval's homer, Beckett also gave up a solo shot to Hunter Pence in the sixth inning. That made the score 5-2 in favor of the Giants (2-1), who had right-hander Tim Lincecum on the mound. Lincecum threw five innings and allowed just two runs on three hits although he walked seven.

Sergio Romo earned his second save of the year.

L.A. collected seven hits and seven walks. "...We didn't do a lot with it tonight," said Mattingly, who many argue is on the hot seat this season.

Matt Kemp is still hitless this year. Currently, he's 0-for-10 with three strikeouts.

"It won't be the last time I have a bad series," said Kemp. "I'm turning the page." Mattingly thinks Kemp is perhaps "pressing" his at bats a bit.

The Dodgers return to action Friday, hosting the Pittsburgh Pirates at 7:10 p.m. Starting pitcher Zack Greinke is scheduled to make his debut.