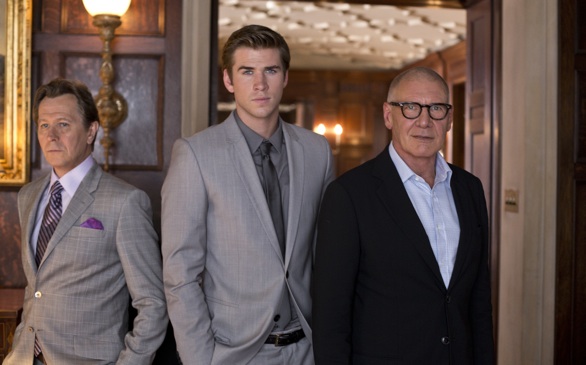 Director Sam Raimi’s 1981 campy horror film The Evil Dead, starring Bruce Campbell, created a huge cult following. Now, writer/director Fede Alvarez is making his feature film debut with Evil Dead, and cult fanatics should be proud with this reboot. Creating his own spin on the tale and stepping it up with a fresh story line, both old and new fans will be pleased with Alvarez's work.

In the film, Mia (Jane Levy, “Suburgatory”) heads to a secluded cabin in the woods with her friends and brother (Shiloh Fernandez) to kick her drug habit. Olivia (Jessica Lucas) is a trained RN who is on hand to help with withdrawal while Eric (Lou Taylor Pucci) is there for some intellectual and comic relief. They come across an evil Book of the Dead. Against all reason, Eric decides to open it and a dormant demon comes to life.

When Mia starts to display some psychotic behavior and visions, her friends simply believe she is just experiencing withdrawal symptoms. Thus, they do not flee the scene when things immediately start to go downhill and sheer terror begins to unfold.

Campus Circle sat down with the star of the film (Levy), and she opened up about stepping into such a large role.

“I didn’t feel that much pressure,” she said. “I was naive and didn’t know anything about this franchise; it was before I was born. I didn’t know what I was getting myself into.”

She continued, “Plus, the original producers and Bruce (Campbell) came on board. Also, I leave it up to the director to feel the pressure.”

Levy had only great things to say about Alvarez, who is originally from Uruguay.

“Fede was such a great director to work with, really generous and open to your interpretation. He’s really free, and you never felt like you had to get something right, so we tried all sorts of stuff,” she said.

Shot in New Zealand during their fall/winter season over a period of 70 days, Levy did remember some trying times. When talking about her process to find this character, she mentioned she took away some life lessons from shooting.

“One of the best things I learned was to leave your work at work,” said Levy. “It’s really easy as an actor to become indulgent and keep in the mindset, but it’s really detrimental to everything and everyone around you.”

She continued, “I was really isolated in New Zealand and made the mistake to not make friends…go home…sleep early and had nightmares. I was in this terrible mindset. Next time, I will not do that!”

However, it wasn’t all doom and gloom on the set for Levy, and she did have fun shooting some of the more extreme scenes.

Remembering a particularly fun and intense scene, she lit up: “Some of the practical effects were really fun. There was one swamp scene where I had to outrun the camera man on a zip line through a forest, and that stuff was really cool.”

She added, “The blood rain at the end was terrible to shoot, but it looked great on screen. There was paint, and it would get in your ears. But it looked so epic and was like nothing I’ve seen before.”

Seeing the film with a large audience at South by Southwest in Austin, Texas only validated what Levy was thinking.

“You can’t ask for a better reaction as an artist when the audience is screaming, hiding and leaving the theatre,” said Levy. “It was bombastic.”

Needless to say, this “Suburgatory” star has definitely stepped outside of her comfort zone for this role in Evil Dead - and doesn't regret it.

“That was a big reason I took this project. I love change, and I love to be challenged,” said Levy. “I feel so lucky. I couldn’t imagine doing anything else.”