Hey Over There: I’m your toaster oven and I can work wonders! 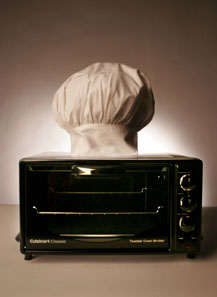 My grandfather was nearly 80 years old before he stepped into the kitchen to do anything more than pop a couple of pieces of bread in the toaster for breakfast.

Almost every meal of his adult life was prepared by my grandmother, whose two greatest culinary achievements were creamy mashed potatoes and Jell-O with floating banana slices.

After my grandmother passed away, he realized he couldn’t rely forever on the endless stream of tuna casseroles the elderly women of Century Village left on his doorstep.

He would have to learn how to cook. Too stubborn to figure out those mysterious dials on his oven and too proud to ask for help, he reverted to the one kitchen appliance he already understood – the toaster oven.

My grandpa developed a small repertoire of meals revolving around lamb chops, baked potatoes and hamburgers that he made in the toaster oven. Thanks to that little metal box, my grandfather finally attained his culinary independence, no small achievement at his or any age.

While an epicure he was not, my grandpa had the right idea. There is no reason to relegate the toaster oven to insipid tasks like melting cheese for English-muffin pizzas or tuna melt sandwiches.

It is still an oven, after all, with precise temperature settings and the ability to bake, roast or broil. A toaster oven can be a godsend on a hot summer day when a regular oven would overheat the kitchen.

It can also help out in a pinch when you need additional oven space for side dishes. Moreover, it heats up faster, uses less energy, and is easier to clean than its big brother.

Given the size limitations of the toaster oven, it’s most practical for preparing meals for one or two. Still, a surprisingly large number of recipes can be adapted to the toaster oven.

While you can hardly roast a whole chicken in the toaster, cut-up chicken pieces work well, as do thick-cut chops and steaks. You can use it to bake an egg. The guy who runs the seafood counter at my local market swears by the toaster oven, saying it is the best way to bake fish filets or make a flawless tuna steak.

Vegetables can be braised or roasted, and fruit can be baked until your house smells like heaven.

In fact, the many ways in which the toaster oven can be used to create upscale cuisine is the premise of a new book called The Gourmet Toaster Oven by Lynn Alley (Ten Speed Press, $18.95). Alley offers 50 sophisticated recipes for the toaster oven, such as coffee cake muffins, chicken potpies, and chocolate lava cake.

The recipes that work best in Alley’s book are the simplest. Grilled steaks with cracked peppercorns is the perfect example of what gourmet toaster oven cuisine should be – simple, but elegant enough for a guest or the single cook who wants to eat well.

All you need to do is rub the steak with olive oil and press the peppercorns and course salt into the meat before broiling. In less than 20 minutes the meat was tender and flavorful, bringing it to the top of my list for an easy weeknight meal.

As an accompaniment to the steak or any grilled meat or fish, try Alley’s roasted asparagus. Her recipe calls for the asparagus to be tossed with olive oil and vinegar, sprinkled with salt, and baked for about 20 minutes until tender.

It takes little effort to prepare and adds great color to your plate. Since the asparagus can be served warm or at room temperature, you can roast it first, and let it rest until the steak is ready to be served. Try the asparagus by itself, garnished with capers or mixed into a salad.

While Alley provides an abundance of recipes for baking in the toaster oven, many of them strike me as unpractical unless your oven is on the fritz or you are partaking in some sort of culinary dare.

So long as the rest of my kitchen remains intact, you won’t find me baking miniature breads, muffins, scones or carrot cakes in my toaster oven any time soon.

However, she imparts some smart advice for cookie lovers – next time you make a batch of cookie dough, put individual scoops on a cookie sheet as if you were going to bake them, but freeze them instead. Once they are frozen, toss them into a freezer bag to store. Whenever you have a craving, take a few scoops out of your freezer and plunk them into a hot toaster oven – and voila! – in minutes you’ll have freshly baked cookies.

The toaster oven is also perfectly suited for baking simple fruit desserts, such as baked Italian plums with honey, a peach cobbler, or a banana glazed with brown sugar and topped with vanilla ice cream.

For a homey and fragrant fall dessert, try baking apples with brown sugar, cinnamon, nutmeg and lemon zest. Top the apples with a dollop of Greek yogurt drizzled with honey and chopped pistachios. Or if you prefer, trade the yogurt and honey for a couple of scoops of vanilla ice cream.

It makes me laugh to think I am taking cooking cues from my grandpa, a man who derided all salad greens as "foliage," and topped everything he could with a large heaping of "white" (his code name for whipped cream in a can).

But as he often liked to remind me, we should listen to our elders. They can be very wise.

Distributed by Knight Ridder/Tribune Information Services.
Article posted on 11/29/2005
This article has been viewed 2413 times.