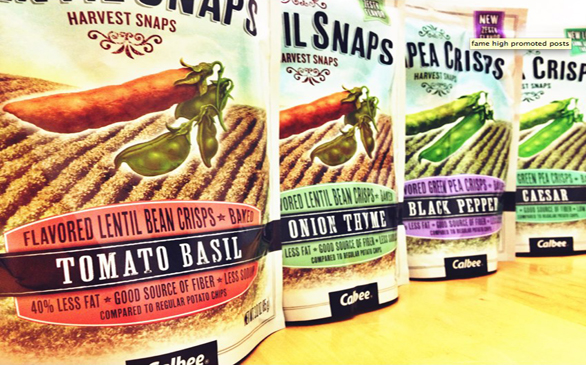 If you’ve ever eaten a bag of Snapea Crips, you probably remember the original skepticism you first had before trying out these little green guys. The appearance and texture looked a little bit like a Spinach-flavored Cheeto, and the pungent odor emitting from the bag smelled a little bit like hay. You were probably thinking, “Why am I even going to waste a single one of my calories on this?”

And then you were coerced, most likely by one of your more adventurous, Trader Joes loving, yoga enthusiast friends, into trying just one little crisp. You acquiesced and thought it was pretty good, but it was definitely something you wouldn’t go out of your way to buy on your own. However, you found yourself five minutes later craving another crisp, and so you decided to indulge just a little bit more…and then maybe a little bit more.

Before you knew it, you had literally just polished off a whole bag. You felt a little bad but justified the snap pea binge by the fact that you were technically just eating your vegetables for the day. Some familiar? Honestly, it’s a more common occurrence than you’d think.

The makers of Snapea Crisps totally understand your infatuation with their product and so have created an equally nom-liscious snack for you to develop a new obsession with. The new vegetable of choice? A legume – lentil beans to be exact. In fact, 65 percent of the new Lentil Snaps are made from whole red lentil beans. The crisps will hit stores in April and come in two flavors: tomato basil and onion thyme. They are baked in the same way that Snapea Crisps are.

Both Lentil Snaps and Snapea Crisps are a part of Calbee’s new “Harvest Snaps” line, but we might be temporarily cheating on the crisps for the snaps – we’re pretty addicted. Besides the two tasty flavors we can’t get enough of, Lentil Snaps are a perfect potato chip alternative – may we go so far as to say this might actually be good for us? The snaps are just 120 calories for 24 crisps and one serving provides 10 percent of your daily fiber.

Besides the snaps’ healthy component, the other thing we love about Calbee’s new product has to do with snack logistics: between work, class and internships a versatile snack is a must. Lentil Snaps are one of those things that are perfect by themselves, with hummus, over a salad – you name it. Plus, they’re pretty inexpensive, which allows us to feel a little better about buying one for the pantry, the car and the backpack just in case we are temporarily trapped somewhere and a craving hits. Seriously, we just don’t want to be unprepared for that.

Check out harvestsnaps.com to find out which retailers in your area carry Lentil Snaps and join the “Snap Pack,” which will keep you up to date on promotions and other Harvest Snaps updates.

And don’t forget to enter our Campus Circle sweepstakes online for the chance to win 10 bags of Lentil Snaps and Snapea Crisps. To enter, click here.

Special Features
We tried more than 25 alternative proteins. These were the best (and worst)
1,481 views

Special Features
One-pot wonders: These dishes offer all the flavor but without all the cleanup
648 views

Special Features
‘Cuban’ beer is being sold in Miami. Is it a communist invasion or clever capitalismo?
333 views

Special Features
What is cacio e pepe and how did it take over the world?
321 views

Special Features
The bubble tea breakdown: What to order, and a toppings explainer
375 views

Special Features
The cicadas are here. So, of course we had to taste them with Old Bay.
566 views
bid=||