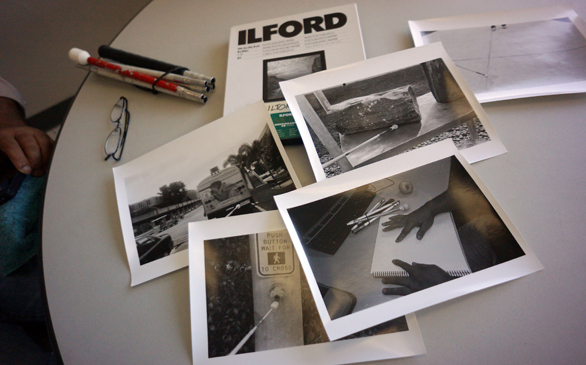 To capture the perfect scene with his point-and-shoot Olympus camera, Milton Young will touch the subject first, his long fingers feeling the contours and angles, the rough surfaces or the smooth facade. He will sniff the air for a familiar scent and turn his face to listen to the sound that echoes off the wall.

He gives an example of this technique: "I wanted to take a picture of this bridge and I saw it in my mind because I knew how the wind felt on that bridge. ... I've walked that way so many times."

At 60, Young is a budding photographer whose unique way of viewing the world has garnered praise from his professor and fellow students at Miami Dade College. Young is also blind. He has no vision in his right eye and makes out only shadows with his left. That hasn't stopped him from snapping photos of MDC's Kendall Campus landmarks: an open breezeway, a stairwell, a crosswalk, the back of a public bus.

When prodded, he jokes, "I see with my other senses just fine."

Photography professor Tony Chirinos says Young has exceeded his expectations. "When I saw his first contact sheet, I was shocked. The composition was really on."

Young's photos feature his cane in a central role. The first series taken for his Intro to Photography course was titled "Encountering My World." "I think that was my unconscious way of trying to tell people the struggle I'm going through," he says.

Fellow students are his biggest cheerleaders. Jeremy Sabater, 21, was one of the intermediate photo students paired with Young. He quickly discovered that he'd best arrive prepared to answer the dozens of questions his older mentee had.

"He has this personal and intimate way of shooting images that has been a real inspiration for my own photography" says Sabater, a photography technology major. "Milton was an excellent study tool for me because he's always curious, always inquisitive, wanting to know so much."

Young smiles, pleased when others remark at his stark images and perfect composition. "I want people to ask, 'Is that guy really blind?'"

His journey to photography - and a college degree - has been a circuitous one, chockablock with obstacles and lessons he now treasures.

"Most of my life I held myself back," he says. "But now I think there's no limit to what I can do. I've crossed that threshold from I can't to I can."

Raised in Philadelphia, Young became a widower 19 years ago when his wife died of an aneurysm six days after their third child was born. At the time, he was a mental-health specialist with the now-defunct Grant Center in South Miami-Dade, Fla., a job he eventually left so he could be home in the evenings with his children.

To help with her grief, he bought his eldest daughter, Ciara, now 27, a camera because he had always admired the art of photography. But he never considered learning himself because he was so focused on "just surviving and on raising the children." He wanted to make sure they attended college because he never had.

And they did. Ciara is a part-time photographer, middle daughter Alexa, 24, is studying for her master's degree in nutrition at Florida International University, and David, 19, is a math and economics major at the University of Miami. But even as the children settled into their lives, Young's travails were by no means over. At 53, working as an operations analyst for Royal Caribbean, he was diagnosed with advanced open-angled glaucoma, a hereditary disease that would leave him blind.

"I was so scared, super scared," he recalls. "I bottomed out. I didn't know how I was going to get back together."

For about four years, he didn't tell anyone at the office, until his uncharacteristic mistakes clued in his supervisor. Though Royal Caribbean tried to accommodate him, he decided to take a buyout four years ago. Then he began attending the Lighthouse for the Blind, where he learned Braille.

That's when he decided to fulfill his lifelong dream of attending college. With the help of MDC Kendall Campus ACCESS (A Comprehensive Center for Exceptional Student Services), he enrolled in a full load of courses, using adaptive equipment, including apps on his iPhone, to help him attend class and study.

At about the same time, photo professor Chirinos approached ACCESS director Elizabeth Smith to suggest a pilot program in photography that would pair blind and visually impaired students with those who can see. Chirinos developed the idea after his father lost his eyesight, prompting him to question how a photographer might approach his art without that essential sense.

"We were looking for some brave soul who would be willing to try this experiment," Chirinos says.