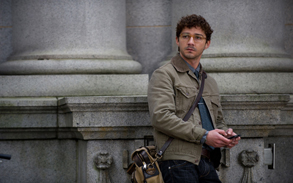 For all its perks, being a popular young actor like Shia LaBeouf in today's media climate can come with some intense pressures.

So intense that one of Hollywood's longest lasting stars says he probably couldn't handle them.

"I don't envy Shia's generation," said Robert Redford, LaBeouf's director and co-star in the new dramatic thriller The Company You Keep. "If what's put to him had been put to me when I was starting out, I might have stayed a painter."

LaBeouf, who joined Redford for an interview here this week, brought in a historical perspective. "There's a lot less protection on a film set than there was in the '70s. And to have art, you need to feel protected."

This now-and-then theme has been on both men's minds lately. It dominates their new Sony Pictures Classic film.

Company is a moral mystery as much as a literal one. It follows Redford's Nick, a 1960s radical who appears to have been guilty of murder in an act of political protest gone wrong.

Living undercover as a suburban husband and father for decades, Nick is forced to go on the run after a journalist (LaBeouf) discovers and then pursues him. Nick is soon seeking out fellow former radicals to help him clear his name. As it tracks the two men's movements, the movie elucidates secrets about Nick's past as well as explores questions about the justification for violence, the limits of idealism and how an older generation's politics can seem alien to a younger one.

"I'm attracted to something that's not really displayed in American life - the gray area," said Redford, not shy, particularly in this phase of his career, about inserting politics into his work. "There was a time when that was what our movies did. But that's being squeezed out of both our movies and our lives."

LaBeouf said he saw this film's excursion into radicalism and its ethics as a kind of personal wish-fulfillment. "My friends and I don't have the same fears my dad's generation did," he said of his father, a Vietnam veteran and outspoken progressive. "He and Bob were in the midst of some pretty wild stuff. My generation's wildest stuff politically is Occupy Wall Street."

The movie was not an easy one to finance, falling apart several times in four years of development before coming together as a low-budget independent production in Vancouver, Canada, last year. The script by Lem Dobbs (The Limey) is based on a novel by Neil Gordon.

"Look, this was a (bad) situation," Redford said, using much stronger language. "The financier was putting on so many restrictions, and he wasn't saying yes, so we couldn't go. And if we did go, the budget was so low it was unworkable. Plus, actors these days are doing three projects at once, so you don't have a lot of time to all be there together."

But as the veteran Redford noted, that's not exclusive to this film: "All these films were easier to make in the 1970s."

Despite the difficulties, Redford continues to make movies, often on subjects that don't square with the interests of today's multiplex-going audience (though he is taking a little detour into popcorn-land with an acting turn in the new Captain America). The last film he directed, 2011's The Conspirator, a period courtroom drama about accused John Wilkes Booth collaborator Mary Surratt, earned strong reviews but fizzled at the box office.

If some hear in Redford's comments the pinings of a man for a time long gone, LaBeouf says the belief in that era is what made today's quality work possible. "Bob's generation built what allows my generation to dream," he said.