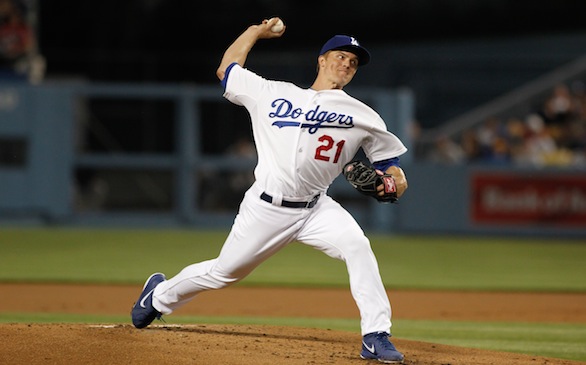 In the seventh inning, Zack Greinke received a standing ovation from the crowd after Dodger manager Don Mattingly decided to relieve him. The fans showed their appreciation then in what turned out to be a 3-0 victory (over the Pirates) for Greinke and the Dodgers.

The Dodgers (2-2) saw Andre Ethier explode on a 2-2 pitch in the second inning; the homer gave L.A. a 1-0 lead, as it essentially became the game-winning run. Ethier finished the game 1-for-3, but the story of the night was all about Greinke.

"I think it's rare to have that kind of touch with his breaking stuff. He was pretty amazing, really," said Mattingly. "He was like Felix (Hernandez). I've seen both those guys pitch when they were 19 and both of them had great command early, and great touch with their off-speed stuff early, and you don't see that."

Greinke (1-0) simply remained humble after the win. "First impressions are important, but I'm just trying to get one out at a time," he said.

Paco Rodriguez closed the seventh, while Kenley Jansen pitched the eighth and Brandon League the ninth. League earned his first save of the season.

The 2009 American League Cy Young winner (Kansas City Royals) tossed 92 pitches in 6.1 innings of work. He struck out six, allowed two hits and no walks. He was in control.

"It was a tremendous show of control, and controlling bat speed," said Pirate manager Clint Hurdle. "All those three-ball counts; we couldn't push him over the edge."

"With Zack, his greatest strength is the ability to command his fastball and not leave anything in the middle of the plate," he said. "He really works the edges."

For the Dodgers, Adrian Gonzalez finished 2-for-4 with an RBI. Matt Kemp finally got his first hit of 2013, coming as an RBI-double in the sixth that scored Mark Ellis. Gonzalez followed with another double, plating Kemp. The Dodgers led 3-0.

The Dodgers face the Pirates Saturday at 6:10 p.m. Pitching ace Clayton Kershaw will take the mound for L.A.