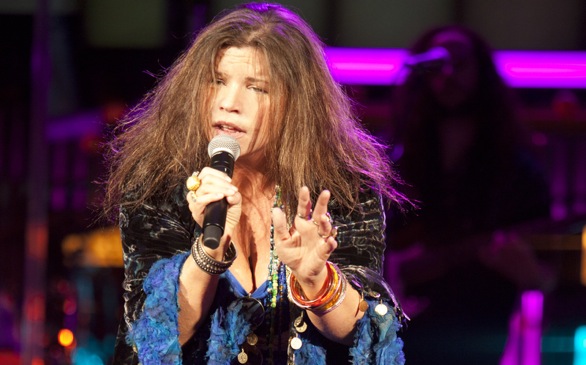 Janis Joplin was dubbed as the Queen of Rock ‘n’ Roll, and after you spend “One Night with Janis Joplin” at the Pasadena Playhouse, you’ll understand why.

Immediately, audiences felt the urge to get out of their seats and dance as Janis Joplin (played by Mary Bridget Davies) started singing. Davies does an extraordinary job as Janis – she’s high energy, humorous and her vocals share that same raspy-bluesy quality that Janis Joplin is famously known for.

Toward the middle of the first act, Davies got the crowd going with “Piece of My Heart,” a song that most people will recognize even if you’re not a Janis Joplin fan or know much about her music. As Davies sang the song’s opening lyrics (“Come on, Come on, Come on, Come on…”), fans couldn’t help it; they got up and sang along with her.

As the show went on, audiences got more acquainted with her background blues singers that are vocally stunning as well. But none of the performances quite compared to the performance of one of Janis Joplin’s “special guests” that came out as a surprise: Aretha Franklin.

Sabrina Elayne Carter gave a breathtaking, accurate performance as Aretha Franklin in the first act. As she and Davies performed “Spirit in the Dark” together, the crowd danced and clapped. It was a jaw dropping, electrifying performance that the real Aretha Franklin and Janis Joplin would be proud of.

Although the show is very energetic and interactive, there were some low-energy moments when Janis Joplin took a break from singing to talk about her life. After a song, she sat in her armchair, microphone in hand, and told the audience about her mother and siblings (Janice Joplin’s mother loved musicals like “West Side Story” and always had the children sing songs), how she got started as a singer, the first bands she played with, her move to California and more. At this show, audiences really got the chance to learn Janice Joplin’s life story.

This combination of rock ‘n’ roll numbers and quiet moments with monologues made for an interesting, interactive and one-of-a-kind show that should not be missed.

“One Night with Janis Joplin” will be at the Pasadena Playhouse until Sunday, April 21. For more information, click here.