To Don 42, Actor Had to Please Jackie Robinson's No. 1 Fan 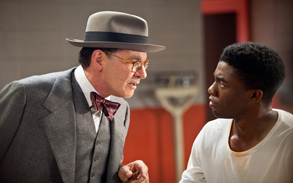 When Chadwick Boseman was cast as Jackie Robinson in the race-themed baseball drama 42, he was immediately confronted by someone with personal knowledge of the renowned ballplayer: the late athlete's widow, Rachel Robinson.

"The first thing she said was basically, 'Who are you, and why do you get to play my husband?'" Boseman said, laughing, as he recalled the woman who had been trying for more than a decade to shepherd through a film about her late husband. "We were sitting in her office down on (New York's) Varick Street, and she was talking to me and showing me photo albums, and she told me she was a little nervous about me playing him."

And although Robinson's apprehensions were eased a few months later after visiting the set, the pressure Boseman felt hints at the expectations that come with making a modern Jackie Robinson feature, which after years of false starts will be released by Warner Bros. on April 12.

Written and directed by veteran screenwriter Brian Helgeland (who won an Oscar for co-writing the "L.A. Confidential" script), the film traces the career of the Brooklyn Dodger as he broke Major League Baseball's color barrier in 1947 - and the politics and relationships among Dodgers General Manager Branch Rickey (Harrison Ford), Manager Leo Durocher (Christopher Meloni) and others.

Boseman said he read numerous books about the athlete and found that the man - and the person Boseman wanted to play - was at odds with the accepted wisdom.

"Some people would view Jackie Robinson as a very safe African American, a docile figure who had a tendency to try to get along with everyone," the actor said. "And when you look at his history, you learn that he has this fire that allows him to take this punishment but also figure out savvy ways of giving it back."

Warner and Legendary Pictures, which produced and financed the movie, chose the little known Oxford-educated actor in hopes that an anonymous face will allow audiences to more fully lose themselves in the idea that he is Jackie Robinson. While the Brooklyn-born actor knew how to play baseball, he and his costars trained for months with professional players. All that effort yielded a measure of authenticity, at least to one person who would know.

"Rachel Robinson came to the set, and she's walking past the old uniforms and all the actors who remind her of all the people she once knew," Boseman recalled. "She would pick out people and say things like, 'Oh, yeah, we didn't really like you' or 'We loved you.'"

"And I'm sweating in the 90-degree sun, and she comes up and hugs me and says, 'You're sweaty.' You know, playfully. And you could tell she was touched because maybe she used to do that to Jackie."