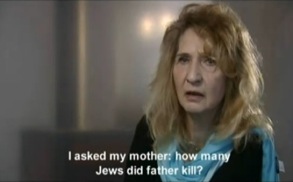 Even though Adolf Hitler did not have children, his Nazi officials did.

The documentary Hitler’s Children introduces us to the descendants of certain Nazi officials that include Hitler’s top and highly regarded associates: Amon Goeth, Hermann Göring, Heinrich Himmler, Rudolf Hoess and others.

These men were involved in the most horrific acts against Jewish prisoners during the Holocaust. For example, some of them were in charge of the creation of the infamous concentration camp Auschwitz, and some of them were the actual commanders at these camps.

In the documentary, we meet these Nazis’ descendants one by one. They tell us a little bit about themselves, what it’s like to be German in another country, their family history and the struggle they have bearing the same name as their Nazi relatives.

One descendant in particular, Bettina Göring (the great-niece of Hitler’s second in command, Hermann Göring), reveals that she hates her last name and was thrilled to change it when she married her first husband. Shockingly, Bettina’s hatred for her great-uncle is so deep that she and her brother decided to stop passing on the Göring name by using extreme measures: sterilization. They both decided to get sterilized to stop the blood line.

Another descendant we meet is Rainer Hoess. His grandfather was Rudolf Hoess, the first commandant of Auschwitz. Rainer’s father grew up in a villa right next to this camp that burned millions of Jewish people into ashes.

We see Rainer’s disgust with his Nazi grandfather’s murderous acts and his anger toward his family’s lies about the Holocaust. The film follows Rainer on his brave trip to Auschwitz, where he visits the same villa that was once home to his father. He also visits the Auschwitz campgrounds.

As shocking and saddening as it is to hear that a person would kill their own family member, viewers will undoubtedly understand why Rainer and other descendants like him have so much contempt for their relatives. One might ask him or herself while listening to these stories: Would I feel the same way if I had family members who were Nazis?

The film does a great job of capturing the inner turmoil within each descendant. As the camera zooms in on their faces when they reveal something shocking or distressing, you can see the pain behind their eyes.

For example, Monika Hertwig’s interview was captivating. She is the daughter of the infamous Amon Goeth, who was tried and hanged for killing tens of thousands of Jewish people at Plaszow concentration camp. She never knew her father was a murderer; as a baby and young child, Plaszow was just a work camp to her. Her mother told her the “horrors” never happened.

After she finds out what her father really did at these camps, she watches Schindler’s List in theaters. Oscar-nominated actor Ralph Fiennes portrayed her father as a sadistic Nazi commander, and she literally goes into shock after watching the film. The camera zooms in on her face during this interview, and her eyes dart from side to side, as if she was reliving the moment when she learned about her father’s crimes.

More interviews are conducted in this way, and it makes us want to learn about each descendant’s past childhood and present state of being. This film is mostly in German and has subtitles, so you might miss a thing or two if you’re not paying close attention. However, the emotion within each interview and piece of dialogue is universal – anyone could see it and understand it.

Probably, for the first time ever, Hitler’s Children will make you sympathize with those who were not the Jewish victims during the Holocaust, but rather the ones who are directly connected to the Nazi villains.

Hitler’s Children is currently available on DVD. For more information on the film, click here.