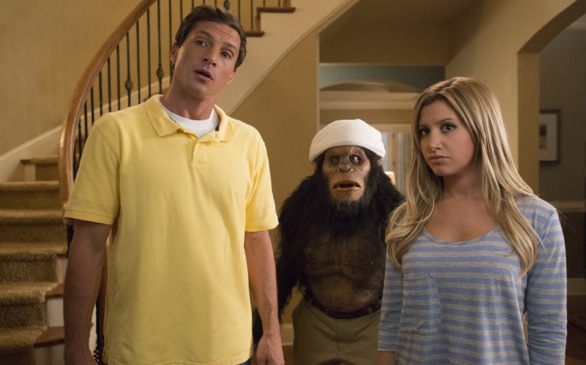 What’s your favorite Scary Movie? If you thought the series was done, it turns out that you’re dead wrong. After a seven-year hiatus, Dimension Films is back with the fifth installment of the Scary Movie franchise with some new material, a jokes and a few fresh faces.

“I thought it was over,” said leading man Simon Rex in a recent interview with Campus Circle. “I didn’t think they’d be doing these anymore. I didn’t think they [the producers] knew either, until horror movies started to make a comeback. So they had something to spoof.”

“The great thing about the Scary Movie franchise,” said executive producer David Zucker, “it’s always fresh, because it’s not based on a premise.”

Fans of the Scary Movie series may have noticed a distinct shift in how these films have been made over the years. Scary Movie V, for example, is much more slapstick than the original Scary Movie. It’s in your face; the approach is much more direct. This shift is the result of a different producer being in charge for the last three Scary Movie installments.

Whereas the Waynes brothers made the first two Scary Movies, Zucker directed Scary Movie 3 and 4 and now has produced V. He is also the brain responsible for such classics as Airplane and The Naked Gun.

Rex explained that these movies are something that he can always come back to as a fun and effective project. He said Scary Movie V is an easy film, where you can “put your brain under your seat. You don’t have to think. Just have an easy laugh.”

Rex also said that a film doesn’t always have to take itself so seriously. A spoof comedy like Scary Movie is comfort food for most people; you know what you’re going to get in a movie like this. It’s dumb humor, and Rex does have a point - you don’t have to think about it.

More than just a good gig, Rex can actually appreciate the value of straightforward slapstick comedy. “I don’t take myself too seriously, like these movies don’t take themselves so seriously,” he said of his perspective going into this project. “I like to make fun of myself; I like to be a clown. I’ll take the pie in the face if I have to, and that’s pretty much what these movies are as a whole. I love it! I’m not above it.”

Ashley Tisdale, who plays Jody in the film, has a similar view. She admitted that taking on this role for Scary Movie V was slightly out of her comfort zone. “One thing that I’m really proud of in this movie, is that I play something very opposite of the characters that people have seen me do,” she said.

She added, “I’m trying to have my own take on it and do what I’m going to do with it. And hopefully people will like it.”

Tisdale is in fact stepping out a little bit in a role like this. Fans are used to seeing her in either television shows or squeaky-clean Disney productions (High School Musical series). For her, this is a role that is both edgy and, at times, a little crass. For all those wondering how far she actually takes it in the film, you can rest assured that it goes pretty far. One the films that Scary Movie V spoof is Black Swan, and yes, Tisdale takes on the famous lesbian scene.

A person who has a great deal of influence over Zucker recommended Tisdale for this role. It wasn’t Tisdale’s agent, it wasn’t her manager, it wasn’t an executive from Dimension - it wasn’t even an adult. It was in fact Zucker’s 10-year-old daughter (a fan of the actress) who recommended her.

“I’ve had my eye on her for years,” Zucker said of Tisdale, going on to say that he had first noticed her on “The Suite Life of Zack and Cody.” “I was watching one of the High School Musical movies with my daughter who was 10. She said, ‘How about Ashley in your movie, Daddy?’”

The rest, as they say, is history. Tisdale made the movie, and time will tell if this delve into slapstick will pay off for her.

With about a dozen celebrity cameos, some well-executed humor and some not-so-well-executed humor, Scary Movie V is what you would expect from a movie like this. It’s not going to be a classic, but then again, it was never meant to be. If goofy slapstick is your thing when it comes to movies, then Scary Movie V is probably something you’ll dig. If not, then just leave it alone, because there’s not too much else there.

As Tisdale put it, “It’s perfect for what it is.”