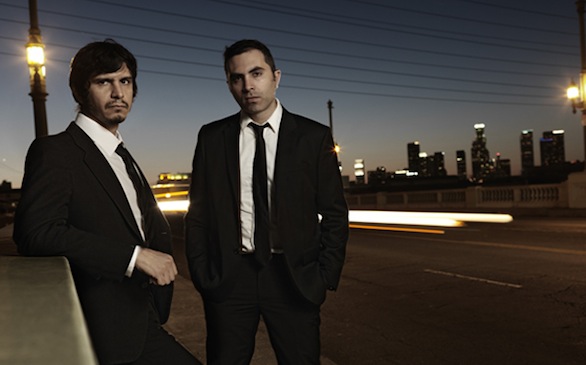 Palenke Soultribe is composed of Juan Diego Borda and Andres “Popa” Erazo; both are Colombia-born and raised. In 2003, they moved to Los Angeles. Four years later (2007), Borda and Erazo grouped the music act.

The rest is history. But, today, they release a full-length album titled Mar, which includes the first single “Move It” featuring Naada, an L.A.-based singer. The 12-track production also contains collaborations with Scrip, Mr. Vallenato, Macondo, and Sr. Mendez, among others.

Campus Circle managed to conduct a phone interview with Borda, who spoke about the origin of their stage name, musical influences, agenda in the next two months, and hobbies, among other things.

Juan Diego Borda: It comes from the African slaves in Colombia who escaped from the Spanish in the 17th century. They escaped to the jungles and formed towns called palenques, and they conserved their culture, customs and language. In a way, these are the first free territories in America. We loved this concept and borrowed from it. We use a lot of this Afro-Colombian music and the tribe reference alludes to the fact that it's not just two people in this. It's an entire group of people involved in this.

JDB: The influences come from the music we've all listened to since we were little. Being Colombian, it's music we would hear from family parties: tropical music, cumbia, salsa, vallenato. But it’s also music we would hear from the U.S. and Europe on the radio – from electronic music to alternative rock, so it became sort of a cocktail in our heads of things to combine, to come out with something new.

CC: When did you guys move to Los Angeles?

JDB: Around 2003. We knew each other from Colombia but we formed the band in L.A. We moved here for personal and professional reasons. Then in 2007, we released our first album, and that's where we are.

CC: What similarities do you find between Los Angeles and Colombia?

CC: How does the group use social media to communicate with fans?

JDB: It's become more of an advantage than say a website or email because people are always paying attention. It allows for direct contact with our fans without middlemen. It's us and them face to face so to speak; it's a great tool. We use Twitter because of the short, direct interactions. We also like Instagram because pictures often say a lot more than text.

CC: What's in your agenda over the next few months?

CC: Where else does the group draw inspiration from when it comes to writing songs?

JDB: It comes from different sources. One of our main points of inspiration comes from listening to other artists – from The Beatles to Joe Arroyo, and then you get inspired to write something the same or better than what they wrote. It's a difficult task, but it's part of the inspiration. We also draw from our own personal experiences, past loves and heartbreaks, but our lyrics are generally positive. We don't really explore depressing themes in our music, but we do explore frailties of man and what love can cause.

CC: What has the city of Los Angeles meant to the group?

JDB: We see it as common ground for the industry. Artists come together here. It's the epicenter for that as well as the publicity agencies who scout our music. It's where most movies directors are who might want to use our music in their movies. It's also a melting pot of all cultures. It does have its drawbacks; it's a bit distant and things are geologically far away from each other. And, of course, it's very competitive. But, nevertheless, we're here, and we love this city. It's our platform and it's allowed us to get to where we are.

CC: Music has been gradually changing and many bands are exploring and using a lot of fusion in their music. Do you see this as the future of music?

JDB: I think it's the present of music. Genres have been very solid throughout the decades, and there have been many fads. But I think we've reached a point were all possible genres have been invented, and now everything is being re-invented and fused. So I don't think any new genres will arise, but rather, genres are being refreshed and combined. This eclectic rebirth has been a long time coming, and we're part of this generation.

CC: What advise could you give youngster who might want to follow in the footsteps of Palenke Soultribe?

JDB: To work hard. This is a very complicated industry, and you'll have to take down many walls, but it's so worth it. The joy one gets from being able to share one's music with the world is indescribable. When people know and dance to your songs is extremely gratifying. It's also a great joy to be able to share the stage and collaborate with legendary musicians. So in all, work very hard, and always mind social media because it's very important in keeping in touch with your fans. And be original; don't copy anyone or anything – find your own sound that comes from the heart, and it will work out.

CC: What do you guys do in your free time, if you even have any?

JDB: Well, when we're not on tour, we're always preparing for the next tour or doing interviews or making the next video. But in the short free time we have, we try to stay and shape and work out or go to the beach to try and find some inspiration. But we mainly spend time with our families, which is the most important thing for us.