L.A.'s Always Been A Part of Enanitos Verdes' Hearts 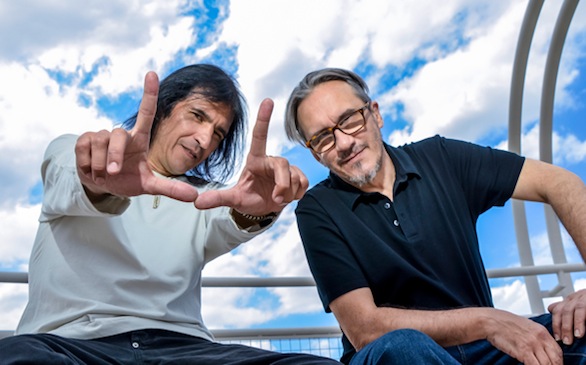 Right from the start, both Marciano Cantero (lead vocals) and Felipe Staiti (lead guitar) of Enanitos Verdes had a fantasy to reach the stars of Hollywood and perform in Los Angeles. Well, the Argentine band has accomplished that and much more over their 30 years of being active in the industry.

During a phone interview directly from New York, Staiti talked about the group’s career, their new 12-track release (Tic Tac) and the significance L.A.’s had in their journey, among other things.

Felipe Staiti: Music is basically my life's engine. For me, it's like walking or breathing. It's something natural; it's a very important part of my life, and I have a deep passion for doing what I like in life, which in this case is music.

CC: When you were younger, did you ever see yourself practicing another profession, or were you always inclined to do music?

FS: Ever since I was young, I was always inclined to do music. I've had other jobs and went to school, but it was always music. I'm sure I could do other things, but the good thing about my life is that I'm able to practice what I love most.

CC: How would you sum up the career that Enanitos Verdes has had up to now?

FS: Well, we've been together for more than 30 years and in the world of music, it's very difficult to sum it all up in just a few words. But I think that in our artistic life, we've had enough experiences to write a manual as to what it means to have a rock band. We've been through everything. We've been hungry, we've slept in trucks, travelling on trains without tickets – everything. But we've all made great sacrifices and put in a lot of effort and we've learned to not let obstacles stop us. If the door is closed, we go in through the window. We've always found a way. That's always been our way of navigating through our artistic life.

CC: Does Tic Tac have an overall concept, or did it just spontaneously come to be?

FS: The concept was just to bring to life the songs we wanted to feature. The album's concept is based on how we've done what we do, and how to keep it all genuine and focus on the foundation of the band, which is the bass and drums. The album does not have much electronic production or anything like that. It's very similar to the music form the 70s, which is one of our favorite types of music, and the concept revolves around us trying to bring back that sound. The album talks about the city, which is where we're from.

CC: What has the city of Los Angeles meant to the band throughout your career?

FS: When we started out, it was always a fantasy of ours to go and play in Los Angeles. Getting to the US was like getting to the moon. We played at Florentine Gardens in Hollywood the first time, and it was great. We got the feeling that we were there to stay. We felt we were going to carve out an important part of our history not just in Los Angeles, but in all the U.S. That's what happened and it continues to be that way. Los Angeles has always been a mecca for music, and it's one of our favorite cities.

CC: What do you see in the future of the music industry? There are a lot of collaborations happening, and lots of fusion of genres. How do you see that play into the industry as a whole?

FS: Well, just the mere fact that Cristian Castro is singing with us, that's something that perhaps five years ago would be unthinkable – with our genres being so different. But as time goes on it seems these boundaries are less and less prominent. There really shouldn't be a concept that music has boundaries; it doesn’t. A song we compose say, in Mendoza, Argentina can be played in the U.S. or Spain. Music is a form of expression, and these factors you speak of are becoming more and more present, and it's good for music.

CC: What advice would you give to young kids who might want to follow in your footsteps in the industry?

FS: I would tell them what I always tell my son. If you believe in something, go for it and don't let adversity get in the way of what you want to do. Music isn't math. You can go to a conservatory to become a better musician, or you can go another route. But the most important thing is to believe in yourself and in what you're doing so that other will, too.