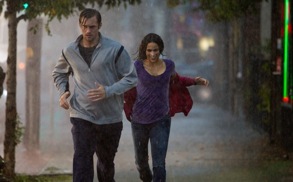 At the start of Disconnect, Max Thieriot’s character Kyle is walking through a disheveled house delivering packages to its teenage occupants. As he reaches a room on the final stairwell, he disrobes to a pair of extra tight speedos and turns on a webcam. It’s then we learn that he, along with the other young residents, are sex workers for an adult-only website.

The movie then starts promisingly with a series of vivid vignettes, and we’re quickly introduced to an assiduous lawyer (Jason Bateman) who is constantly on his cell phone much to the chagrin of his family, a widowed ex-cop (Frank Grillo) who is unaware his mischievous son is a cyber-bully, and a woman (Paula Patton) who finds solace online after the loss of her infant son.

Now we start to recognize the shape Disconnect is going to take: a movie that explores modern technology’s consequences and how it affects and defines our relationships. The film marks the first fiction feature from Henry Alex Rubin, director of the Oscar-nominated documentary Murderball.

Expect to uncomfortably squirm in your seat throughout the film’s duration, for this articulate and particularly relatable drama offers a brutally honest look at the way we sometimes try to connect but wind up distancing ourselves from one another.

What makes the movie so engaging is the way Rubin moves seamlessly between all these stories. He has a profound understanding of these characters, their emotions and the path of their circumstances. The director structures them in such a way that his characters reach a crisis point simultaneously, followed by melancholy clarity although none of them achieve anything resembling an easy sense of solace.

“When I read the script, I was moved by each of the intertwining stories,” said Rubin in a prepared statement. “I find myself drawn to people’s emotions, and I was really drawn to these people and their situations.”

With several intersecting stories and characters crisscrossing and relationships revealed along the way, Disconnect works because it offers a relatable story occurring in today’s society in terms of human interaction, communication and loneliness.

Patton’s character, Cindy, is a frustrated and unhappy spouse whose chat with an online stranger leaves her vulnerable to a computer hacker with drastic results. Through the use of social media, cyber bullies pick on an oddball classmate with dire consequences. There’s plenty of texting, sexting, emailing, webcams and electronic gadgets on display, which makes Rubin’s film relevant to the times we live in.

Written by Andrew Stern, who wanted to pen a multi-story film about how technology is connecting us in one way, Disconnect weaves a tale of dissimilar, disconnected individuals and reflects how technology both unites and divides us. What’s going to happen to each of these characters and how are their lives going to unfold? That’s what keeps you invested in this smart drama.

“I wrote the screenplay when I noticed that at the dinner table people had their phones out and were emailing and texting – that people were present and strangely not present with one another,” said Stern in the statement. “I decided I wanted to write a multi-story film about how technology is connecting us in one way but also disconnecting us at the same time. Because of the way we’ve all accepted living online, texting, tweeting, emailing and so forth, somehow face-to-face personal communication and real human interaction has become less and less important. The film deals with this.”

Disconnect releases in theaters on April 12 at ArcLight Cinemas in Hollywood and AMC Century 15 in Century City. There will be a Q&A with producer Bill Horberg following the 8:15 p.m. show on Saturday, April 13 at the ArcLight. For more information on the film click here.