So You're Going to Coachella?: Get the 411 on artists, Record Store Day and visit Palm Springs! 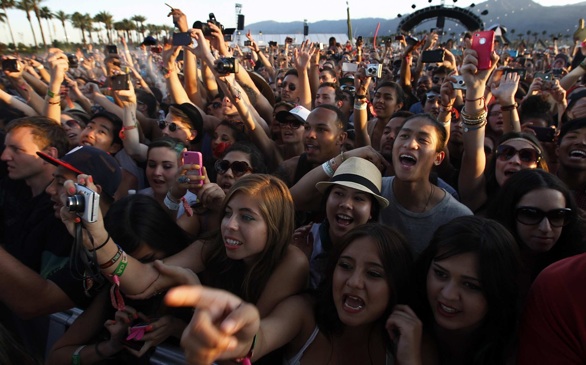 THE FESTIVAL
It’s time once again for the mighty Coachella Valley Music and Arts Festival in Indio. For the second consecutive year,  the festival expands to two weekends: April 12-14 and April 19-21.

The way it’s going to work is like this: bands that play on opening day, Friday, April 12, will also play a week later on April 19, and so on with the Saturday and Sunday line-ups. That means that if you choose, you can see headliners like the Stone Roses, Blur, Phoenix and the Red Hot Chili Peppers twice. And if you should miss them the first weekend, you have a second opportunity to check out New Order, Wu-Tang Clan, Vampire Weekend, Modest Mouse, Bassnectar and all the others.

The number of acts appearing is delightfully overwhelming, but here’s what’s going on with a few select Coachella artists so have a little bit of background information coming into their performances:

JELLO BIAFRA AND THE GUANTANAMO SCHOOL OF MEDICINE – The legendary front man from the Dead Kennedy’s will be showcasing material from his new album White People and the Damage Done.

BIFFY CLYRO – Band’s new album Opposites went straight to #1 in the U.K. and has just been released stateside by Warner Bros.

GHOST B.C. – Lead singer Papa Emeritus II wears a skeleton mask and dresses like the Pope while the rest of the “nameless ghouls” in the band (also masked) wear hooded monk robes. They’re from Sweden, and they play “sweet satanic music.” For a preview, seek out their new video for “Year Zero,” a cut from just-released album Infestissumam.

LITTLE GREEN CARS – These Dublin-based folk/rockers have a new album out called Absolute Zero that features harmony-laden songs about, amongst others, John Wayne and Harper Lee.

JAMES McCARTNEY – James is the only son of Beatle Paul McCartney and the late Linda McCartney. Between Coachella appearances, you can catch him at the Hotel Café on April 16 and 17.

THE NEIGHBOURHOOD – This Los Angeles band is building up a massive fan base in the U.K. and has a debut album I Love You dropping on April 23.

POLIÇA – In between their two Coachella appearances, the band will be playing a show April 16 at the Observatory in Santa Ana.

SMITH WESTERNS – Their new album Soft Will won’t drop until June 11, but first single “Varsity” will be available digitally and on vinyl May 14. Also appearing April 16 at the Echo.

SPACEGHOSTPURRP – This south Florida MC and producer is an integral and prolific part of the underground hip-hop scene; his latest effort, out now, is an E.P. called BMW (Black Money World).

RECORD STORE DAY
Record Store Day falls on Saturday, April 20 this year, but you don’t have to miss all the fun if you’ll be at Coachella that day. Indie chain and Record Store Day participant Zia Records will have a store set up at the festival; look for these limited edition collectible vinyl releases on the second weekend:

PALM SPRINGS IS NEARBY
Palm Springs is not far from the festival site, and there is a three-day shuttle pass for either weekend that is good for unlimited round trip travel from Palm Springs to Coachella is $50 (some routes are $80.) Shuttles will run continuously from 11 a.m. until one hour after the music ends each night. There are eight different routes, and many pick-up spots are adjacent to hotels like La Quinta and the Marriott. Shuttle tickets must be purchased in advance at www.valleymusictravel.com More information about planning a visit to the greater Palm Springs area is available at www.palmspringsoasis.com