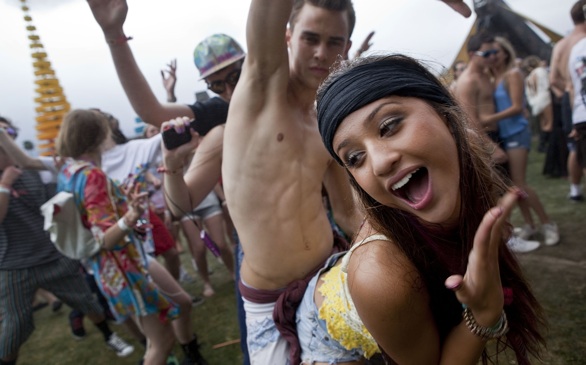 Don't overdo it on the alcohol and get caught doing something embarrassing on camera!
(Credit: Arkasha Stevenson/Los Angeles Times/MCT)

If you’ve already attended Coachella in the past, then these tips and warnings might be old news to you. However, if you’re going to Coachella for the first time ever, then take note of the “dos” and “don’ts” you need to watch out for at this non-stop music festival and party!

DO Pre-Game
When it's over 100 degrees outside, that beer garden on the festival grounds offering ice-cold drinks calls your name. But be warned you can end up paying a hefty amount of cash for a tiny drink.  You already spent your whole bank account trying to get to Coachella; save some money and drink beforehand by boozing it up at your hotel before making your way to the event.

DON’T Be the Crazy Drunk
With that said, don’t be the “drunky” everyone is slowly easing away from mid-concert. Being too drunk cannot only turn a fun day into a forgettable one, but it’s also dangerous. You risk a) becoming a Youtube star, referring to the hundreds of “wasted guy at Coachella” videos, b) waking up somewhere lost or c) getting all your stuff stolen. Drink cautiously.

DO Make New Friends
It’s Coachella. People are here from all over the world, and if you’re waiting to see the same band, you already have one thing in common. Bonding with perfect strangers is part of the Coachella experience and is so much fun. Who doesn’t want to chat about Radiohead with a good-looking Aussie?

DON’T Take Anything from Them
Just say “no.” While making friends is perfectly fine, let’s keep in mind these people are strangers. With all the drugs going around, be careful what you take. Coachella is filled with a wide variety of people whose intentions you may not know.

DO Take Lots of Photos
Pictures are a must! After all, it’s the only time this year you can relish in your inner hippie and wear your Coachella finest. Every annual Coachella-goer needs that quintessential Coachella picture. Take pictures and capture memories. You’ll look back on them years from now when you’re way too old to go to Coachella.

DON’T be the Person that Loses Everything
You need your camera to take pictures. You need your phone to find your friends. You need your wallet to buy drinks. Take care of all of these items, and be smart. Every year, a countless number of lost cameras and phones are found. Don’t be that person. You and your friends will have to waste valuable Coachella time helping you look for your lost item and well – it’s a pain! Don’t put your phone or camera in your back pocket, and don’t put them down: Keep them on you at all times.

DO Stay Out All Night
What kind of Coachella would it be if you didn’t make the most of your nights? Not a very good one. Part of Coachella is having non-stop fun for three days, so stay out late! Enjoy the activities and games Coachella provides for campers, and make memories with your friends.

DON’T Forget to Wake up the Next Day
The biggest mistake people make at Coachella is not waking up for the afternoon performances because of a previous night’s partying. Sacrifice sleep; get yourself out of bed! These small-name performers are there for a reason, and they’ll most likely be big name performers by next year. You paid $400 to see them, so watch them.

DO Wear Your Hippie Finest
Let’s be honest: we all turn a little hippie-ish at Coachella. Embrace it. Wear that flower headband and Lennon sunglasses. You won’t get to do it any other time of the year.

DON’T Go Dressed Like an Idiot
Somewhere along the way, it became a thing for people to wear outrageous outfits to Coachella. Don’t do it. People will stare, laugh and take pictures of your ridiculous wizard hat.

DO Feel Free to Wander on Your Own
With the countless options and schedules, it’s hard to do everything you want if you stay in a big group. This is just as much your Coachella experience as anyone else’s, so feel free to separate from the group to catch a band no one else wants to see.

DON’T Lose Your Friends Forever
If you want to go off on your own, that’s fine. But don’t be the main character of the endlessly told story of the person whose phone died and never found their friends again. Have a plan or a meeting spot so eventually you can touch base with some familiar faces. The endless sea of people can start to look a little like a zombie movie when the faces staring back at you are unfamiliar and drugged up.