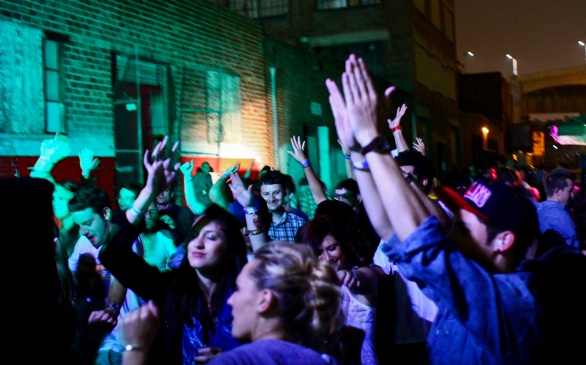 Brokechella returns to Downtown L.A. with its third edition of packed crowds and DJ’s alive bands!
(Credit: Courtesy of Brokechella )

Like all good OG L.A. hipsters, I will not be attending Coachella this year.

However, my lack of pilgrimage to the desert in April will not be due to any sort of moral problem I find with the festival’s commoditization of music or lack of affordable, high quality liquor on the grounds. Nor will it be due to the fact that for two straight weeks Indio, Calif. looks as if it’s hosting the world’s largest convention for a trashy Forever 21 bohemian line (clearly I’m not bitter).

In reality, I long for the convenience of being able to see Janelle Monáe, the XX and Portugal. the Man all in the span of a few hours. However, I’m faced with another reality – it’s called “my credit limit.” I’m willing to bet that many of my fellow Angelinos share my lamentations over not being able afford the steep ticket price for this year’s line-up, and thus will be subject to the confines of L.A.’s city limits during those two fateful weeks mid-April.

Luckily, Goldenvoice has provided some “Localchella” shows in L.A. for those that can’t make it out to Indio for the weekend. I’m not sure whether I should feel offended and shamed for wanting to attend a Goldenvoice pity show or deeply thankful that they even thought of me during this extremely stressful time for them. Either way, select artists will be playing at venues all around L.A. during April. If you find that you can’t resist, just quietly indulge and cite ignorance when confronted with the fact that the Coachella promoters saved you some leftovers.

However, if you are insatiably committed to the anti-Coachella agenda, I am fully ready to support you in this. True commitment means devoting two whole weekends to excavating all of the untapped and underground local music L.A. has to offer.

WEEKEND 1: Norton Records Benefit & Glow Marrow
After sifting through the masses, I found a couple of upcoming shows that are totally worth the gas and modest ticket price, starting with the wallet-friendly shows at the Echo. This place features tons of new artists as well as DJ residencies that are usually under $10 and sometimes even free if you get in the door early enough.

If you’re looking to get the most musical bang for your buck, you should clear your schedule for April 13: the Echo will host a benefit for Norton Records, the New York-based label with a focus on retro rock ‘n’ roll and rockabilly music. The benefit will feature some of Norton’s top artists such as the Untamed Youth and the Phantom Surfers, and what better way to object to the over-commoditization of festival music than supporting an independent label such as Norton?

Tickets are currently sold out online but will be available on Saturday when doors open at 11:30 a.m. for just $18.

Another place to check out is the free show at the Satellite Sunday night on April 14, where up-and-comer Glow Marrow will perform alongside Tic Tic Boom and Young Empress. Glow Marrow is a little surfer rock, a little Beach House-esque electro pop and perfect for a mellow Sunday night in Silver Lake. If you can’t make the show, be sure to check out their newly released EP, Braver Days.

WEEKEND 2: Kill Paris, Sigur Rós & Brokechella
After the commotion of weekend one of anti-coachella festivities, I suggest you take the week to recover, center yourself and reinvigorate your rage/passion to support more equally awesome acts. Speaking of, if you can find the strength to make the small trek to the Observatory Friday night, you might just find an unexpected gem for the price of a $10 ticket.

Kill Paris is an EDM up-and-comer that throws a softer edge on traditional House with adorable and dance-worthy tracks such as “Baby Come Back” and “The Love We Shared.”

If you’re not feeling the energy for a breakbeat night, try checking out some of the mellow, dream poppy goodness from Sigur Rós, who will be also be performing Friday at the Santa Barbara Bowl (although Sigur Rós will be appearing Empire Polo Club grounds this year, their SB show is part of a world tour and in no way sponsored by Goldenvoice, thus allowing us to justify the purchasing of tickets).

However, if you really want to protest in a way that’s grandiose as possible, this requires attendance at one of L.A.’s underground, anti-Coach festivals.

Brokechella, the self-proclaimed “music fest for the rest of us,” will shut down an entire street in downtown on April 20 at Six01 Studios. The day festival is a music initiative from cARTel: Collaborative Arts LA and will feature three stages, visual artists and all the food truck noms your little “4/20” heart will desire.

The indie, EDM and hip-hop areas will feature local new talent to check out, including Mystery Skulls, Hello Echo and Fly Guys. Apart from the eclectic pick of L.A. music, the day festival will also include art installations, giveaways, an outdoor Carlsberg bar and a “Vendor Row” that will consist of food, art, comics and clothing for sale.

Tickets are $10 online and at the door, but make sure you get yours as soon as possible – they will definitely sell out.

Even if you spend the rest of the two weekends sulking and listening to Modest Mouse on repeat via iTunes, attending Brokechella along with the other angst-y, bitter music fans will totally absolve you of skipping that one overpriced music thing in Palm Springs that probably wasn’t even that good anyways.