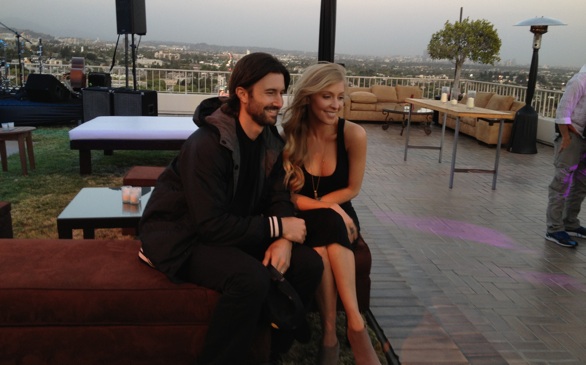 Brandon and Leah sit atop the rooftop at their record release party in Hollywood.
(Credit: N/A)

On Monday, April 8, the Hollywood hotel hosted a record release party on its rooftop for eclectic singer/songwriting duo, Brandon & Leah. The duo celebrated the release of their new digital EP, Cronies.

The five-song EP presents a modern, electro-pop-soul twist on the Southern California sound, which was quite fitting for a small set overlooking the city. Brandon and Leah showcased their sultry, exotic and infectious music that mixed genres with touches of Brazilian pop and jazzy indie rock.

Guests were able to sip on tropical drinks while taking in the ambient music that really gave a taste of the breezy, windswept nights in Los Angeles. Leah’s voice is remarkably delicate, and the funky rhythm of an upright bass really encompassed the duality of the city. Their track "Showstopper" lived up to its name and evoked life in Los Angeles.

The evening was also filmed to be included in an upcoming episode of "Keeping up with the Kardashians." Guests included family. Brandon’s brother Brody and father Bruce Jenner as well as stepsister Kim Kardashian (who was positively glowing in expectant motherhood) came out to support.  Producers and friends also came to enjoy the show and bask in the fun, soulful performance that Brandon and Leah put on with their backing musicians, which included Warpaint drummer Stella Mozgawa.

Their duo's live performance brought back the vibes of an old Hollywood club or musicians at jazzy speakeasies. It was definitely a marriage of a past era finding new life in the L.A. hills of. Pop the EP in your car stereo or listen to it on your iPod - you'll definitely get that same vibe.