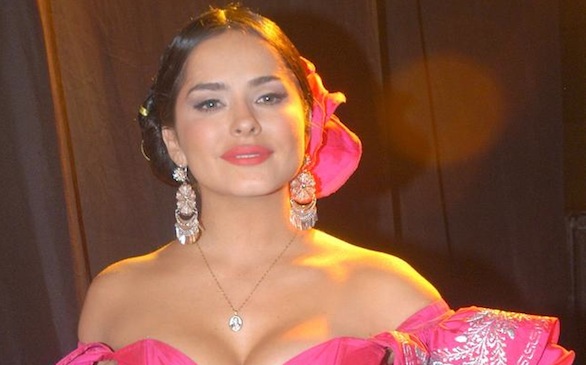 The much-awaited Mexico-based soap opera, “Qué Bonito Amor” (What A Beautiful Love), has arrived. It premieres tonight on the Univision network at 10 p.m. ET/PT (9 p.m. Central), with a stellar cast led by the one-and-only Danna García.

A plot like no other before, “Qué Bonito Amor” also stars Jorge Salinas, Rafael Negrete, Arturo Peniche, Angélica María and Pablo Montero, among others.

“(It’s) a musical project full of music such as the ranchera genre,” said García, a Colombia-born actress. “It’s about love. The title of the soap opera says it all.”

Both García and Salinas play the lead roles.

“It details a lovely romantic story of two people who come from two different worlds,” García added. “The lead man comes from the U.S., and the girl lives in Mexico. They meet and their two styles of living clash.”

García, who in 1996 became the first Colombian to play a role in a Mexican soap opera, doesn’t hesitate to add more insight.

“The guy (Salinas) is rich and he has to escape his usual commodities to enter a new life - where he meets a mariachi girl."

According to an enthusiastic García, “Qué Bonito Amor” carries about 13 men and one girl who sing at a bar in Jalisco. That’s where the fun begins and continues.

But she does confess that the theme of love outshines everything else.

“In this musical story, a great love story develops. It’s also a story of heartbreak,” said García, who’s appeared in numerous telenovelas before.

However, the charismatic García acknowledges that “Qué Bonito Amor” (which will feature traditional mariachi songs) isn’t only about love and music.

“There’s also a lot of action and comedy,” she said. “There’s a little bit of everything.”

When asked about her most beautiful love ever, García said: “My family.”

“Qué Bonito Amor” is scheduled to air in Spanish every Monday through Friday. It’s available in English, too, with closed captioning on CC3. For more information, visit univision.com/quebonitoamor.