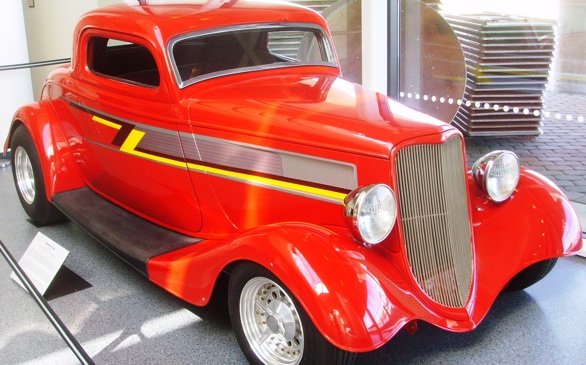 Last year, when Guns N’ Roses, the Beastie Boys and the Red Hot Chili Peppers were inducted into the Rock and Roll Hall of Fame, the induction ceremony was held in Cleveland. The ceremony has at times been held in New York City, and this year it takes place in Los Angeles. But no matter where the ceremony occurs, the inducted acts will live on forever in Cleveland at rock’s greatest shrine: the Rock and Roll Hall of Fame and Museum.

To fully take in all seven floors of exhibits at the museum, visitors should plan on spending five or six hours. There’s so much to see that it’s best to follow the museum’s suggested order: Begin on the lower level with a viewing of the short introductory film in the Mystery Train theater before moving on to exhibits focused on the roots of rock ‘n’ roll (blues, gospel, R&B, country, bluegrass and folk). You can view the Cities and Sounds exhibit (city scenes, the ‘50s, soul and heavy metal), Rapper’s Delight (the story of hip-hop), the Legends of Rock and Roll (Beatles, Stones, Hendrix, Doors, U2, Bowie, etc.), exhibits focusing on Sun Records and Atlantic Records and a special display about music and acts from Cleveland and throughout the Midwest.

On the upper floors are exhibits dedicated to Pink Floyd, The Wall, Rolling Stone magazine, Alan Freed’s radio studio (Freed coined or at least popularized the tern “rock and roll”), inductee signatures and tons of permanent and special exhibitions. You’ll see hundreds of guitars and other instruments used by the stars as well as their stage outfits, records, awards, photos and posters and all sorts of personal memorabilia, including large items like cars and drum kits. Some of the most eye-catching items on display are stage props ranging from neon signs to giant blow-up dolls.

And, of course, you can hear music via interactive displays throughout the museum.

Students with I.D. get a $5 discount off the regular admission price of $22, and if you are a band on tour (and can prove it) you can get in free.

The Rock and Roll Hall of Fame and Museum is definitely a place that rock fans should see at least once, but if you make the pilgrimage to Cleveland and are able to spend a little additional time in the city, there’s more to do that will fit right in with a rock-oriented agenda.

Cleveland is divided into distinct neighborhoods, many of which have been revitalized by an influx of hip shops, galleries and eateries. In Cleveland Heights, for example, you can get lost in the maze of collectibles at Big Fun, a large shop absolutely crammed with the cool and kitschy: lunch boxes, blow-up advertising toys, Barbies, classic toys and long forgotten gizmos, cards, posters and rock ‘n’ roll memorabilia.

Stay in the Heights for lunch at Melt Bar & Grilled, where the menu consists solely of a wide variety of over-the-top grilled cheese sandwiches. These filling sandwiches aren’t what mama used to make; try the “Parmageddon” that’s stuffed with onions, kraut and a potato and cheese perogi. Melt’s owner is a big music fan, and the joint’s menus are all printed on the backs of record album covers.

Finish your day in Cleveland Heights at the Grog Shop, a live music venue that presents shows by underground and indie bands. They have an extensive offering of microbrews and imported beers on hand.

Other not-to-miss places in Cleveland include the Prosperity Social Club, an old-timey bar with a retro bowling machine, a menu that includes some of the best perogies (Polish dumplings) in town and copious amounts of inexpensive beer from breweries like Blatz, Pabst and Hamms. This hipster hangout also has live music throughout the week.

Then there’s the Happy Dog, a killer lunch spot that is to hot dogs what Melt is to grilled ham and cheese. Also visist Gotta Groove Records and the Waterloo Arts District in the Collinwood neighborhood – you’ll also find a few more record stores specializing in vinyl.

You’ve heard it before and your visit to Cleveland will prove it; Cleveland rocks!

Visitor information is available at positivelycleveland.com.