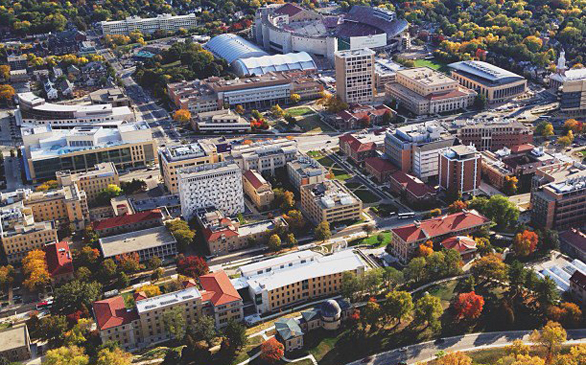 Every time a college student's life is cut short by bacterial meningitis, Gail Bailey flashes back to 2002, when her 20-year-old son at the University of Wisconsin-Madison thought he had the flu and died 16 hours later.

"It comes back really hard," said Bailey, of Jefferson, "and not just for me, but I'm in touch with other mothers who have lost kids to this at Madison and other UW campuses. ... It's one of the worst things that can happen to anyone."

Bailey tracks through newspaper articles the names and the universities the students who get meningitis attended: UW campuses in Madison, Platteville, Oshkosh, River Falls, Eau Claire and Whitewater. She has connected with several of their families, and a few students who contracted, but survived, the uncommon bacterial infection. She joined a national group, Moms on Meningitis, through the National Meningitis Association.

Her son Eddie, valedictorian of his class at Jefferson High School, was attending the state's flagship university on a full-tuition scholarship to study economics and finance.

Bailey didn't know there was a vaccine against meningococcal disease. It wasn't widely advocated then, so Eddie didn't get the shot.

Henry Mackaman - the 21-year-old UW-Madison senior from St. Paul, Minn., who died of the disease last Wednesday - did get the meningococcal vaccine, including the recommended booster at the start of college for students living in residence halls, according to his uncle Dan Mackaman, also of St. Paul.

A few who are immunized get the disease anyway. The vaccine is 90 percent effective against four strains of bacterium that transmit the disease; one strain isn't covered for complicated reasons involving the brain. People whose immune systems for whatever reason cannot fight off the bacterium may be most susceptible to it if they have a cold virus, or don't get enough sleep.

"It's a big mystery," Henry Mackaman's uncle said Friday. "All of us are curious about how this happened because Henry was vaccinated the way any kid going to college is."

Studies show college students are twice as susceptible to meningococcal disease as others their age. They come from all over the world and live in close quarters, where the bacteria can easily multiply, and their immune systems notoriously are stressed by lack of sleep.

About 10 percent of the general population carries the bacteria in the nose or throat without getting sick. But they may pass it through saliva to someone else who can't handle it by sharing eating utensils, drinks, smoking materials or a kiss.

Bailey and her husband, Phillip, fought for a state law in memory of Eddie, and the law passed Oct. 16, 2003. It requires universities to provide all students with information about meningococcal disease and hepatitis B, and the availability of vaccines. It requires students in university residence halls to confirm they received the information, and to provide immunization dates if they got the shots.

The law does not require students to be immunized.

It never occurred to the Baileys or the Mackamans that their healthy sons could be susceptible to a disease that strikes an average of 1,500 Americans annually.

Four UW-Madison students have died since 2002 of meningococcal disease.

On April 6, Henry Mackaman went to the emergency department at Meriter Hospital a couple of blocks from his Madison apartment because he had a 104-degree fever. He was sent home after a chest X-ray ruled out pneumonia, his family said.

Early on April 8 morning, he walked back to the hospital because he had a headache, trouble speaking, and his right hand "felt funny."

Doctors ran more tests and made the diagnosis as his condition rapidly deteriorated. He was placed on a ventilator.

When his swollen brain did not respond to antibiotics, and there was no sign of brain activity on April 10, his family invited small groups of his friends into his hospital room to say goodbye.

He was a DJ for a campus radio station and a guitarist and producer with the Twin Cities band Phantom Vibration, which he started with high school buddies and still played in.

His musician friends brought guitars, accordions and even a ukulele to his hospital room to play for him one last time.

Friends studying abroad Skyped into his room via laptops, tablets and smartphones from Poland and the Czech Republic.

About 50 friends and family members at one point packed his room for a group goodbye.

"It was a very moving moment," Dan Mackaman recalled.

Campus News
California State campuses with most COVID-19 cases have one thing in common – they like to party
1,653 views