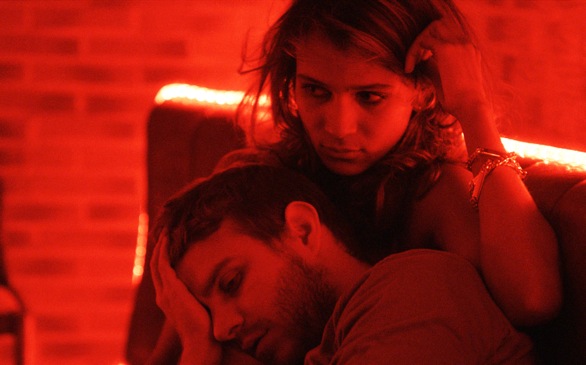 Alone and heartbroken after the recent split with his girlfriend of five years, Simon (Brady Corbet) takes a holiday to Paris to “figure things out” in the film, Simon Killer. It seems that for a large portion of the the movie, Simon wanders aimlessly around the city. Then, the devastating breakup and his obsession with his ex is set up as he writes to her out of spite, as if trying to prove he’s having a great time.

During his excursions, Simon has a couple of strange encounters with bad-tempered Parisians and two young women, until finally he finds himself at a sex club, where he has intercourse with a prostitute named Victoria (Mati Diop). The two then become entangled in a destructive relationship full of secrets, blackmail and lies.

Simon Killer starts off interestingly as writer/director Antonio Campos makes us watch all of Simon’s quirks and movements, which is enough to tell us there is something off about him; however, it is never clear what exactly is off about him.

Even though the film’s initial intrigue is strong, it quickly dwindles as the film diverts with strong and graphic sex scenes, which doesn’t add to either the plot or the characters. Instead, it makes film seem as if it’s just about Simon’s almost sex addiction and his view of women as objects.

It is also very difficult to connect or like Simon, as all we see of him is a cold, selfish and compulsive liar. The most interesting fact that is revealed about Simon is his study of the relationship between the eye and the human brain in college. Ironically enough, Victoria and the young Parisian he seduces both have small imperfections in their eyes (definitely not a coincidence).

Overall, the film is anti-climatic. The blackmail scenario seems to be the answer to the film’s lack of tension, but it ends up not going anywhere.

The title of the film is also quite misleading – Simon is more of a cowardly character than a threatening one.

But despite the fact that Simon Killer doesn’t deliver concrete evidence or facts, it gives the audience enough to piece the story together themselves.