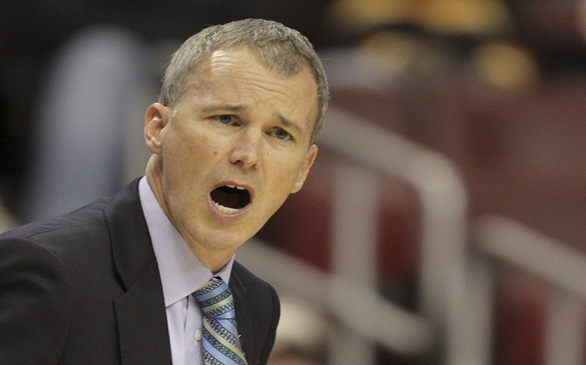 There is something about the way Andy Enfield leans back in a big leather chair, phone pressed against one ear, doodling on a notepad as he talks. His shirt is pressed, his cuff monogrammed.

The new boss of the USC basketball team looks more like a businessman than a coach.

On his first day with the Trojans - after the introductory news conference - he spends a hectic couple of hours in his office scanning paperwork, scheduling appointments and sneaking bites of a shrimp salad that has been placed before him. The telephone rings every 20 minutes with another radio interview.

Listen to Enfield, 43, talk about the woman he married, a former model. "If you question my recruiting ability," he says, "just look at my wife."

Listen to him talk about "Dunk City," the run-and-fun brand of basketball that propelled unknown Florida Gulf Coast deep into the NCAA Tournament, the type of offense he promises to instill at his new school. "Do recruits want to go somewhere and play a slowdown style?" he asks. "Or do they want to enjoy themselves and win?"

Enfield is working it, marketing himself, pitching what he's got to curious Southern California basketball fans. His delivery is laid-back and friendly, a little self-deprecating, but with a purpose.

He comes at the game from a slightly different angle.

Basketball was his first love.

Hailing from tiny Shippensburg, Pa., Enfield grew up watching his father coach the local ninth-grade team. His father also picked, shoveled and raked their sloping backyard to build a halfcourt.

"Andy would come home from school, jump rope, do ball-handling skills and shoot baskets," his mother, Barb, says. "He's sort of a perfectionist."

Hard work turned him into a star at Shippensburg High, where he scored more than 1,000 points in his final two seasons. But basketball wasn't his only interest.

"I was always a math guy," Enfield says. "And I liked business."

When it came time for college, Enfield kept two priorities in mind. He chose Johns Hopkins knowing he could start right away for the Division III team. As Coach Bill Nelson puts it: "He wanted to be a big fish in a little pond."

Hopkins also offered a top-notch education. While Enfield excelled on court - setting a Division III record by making 92.5 percent of his free throws - he earned Academic All-American honors and a degree in economics.

And, just after graduation, the Baltimore school offered one more opportunity, the chance to capitalize on an idea that had stuck with him for years.

"He would go to basketball camps when he was in junior high and high school," his mother says. "He realized how much money they were making on these camps."

"Andy was always very serious about whatever he was doing, whether it was schoolwork or sports," Pietramala recalls. "I don't want to say he was nerdy because he wasn't, but the other guys were more free-spirited, they'd joke a little more."

Enfield suggested that he and Pietramala start a lacrosse camp together. Back in Shippensburg, his father, Bill, thought: A lacrosse camp? Andy knows nothing about lacrosse. But Pietramala had the name recognition to attract students and the knowledge to coach. Enfield promised to handle the business end.

"He had a plan," Pietramala says. "We did some very successful camps."

It was the first step for a young man hoping to combine his two passions.

Less than a year. That's all it took.

After about 10 months of working at a major consulting firm, Enfield realized the traditional corporate path wasn't for him. Returning to school for an MBA at Maryland, he imagined a different future.

"I thought about a lot of businesses, but I kept coming back to what I love," he says. "I wanted to make basketball a career."

First came a business plan for a new company, All Net Basketball, which would specialize in clinics, camps and instructional videos. Then he wrote to every team in the NBA, offering his services as a shooting guru. Most did not respond, and the few that did told him thanks but no thanks.

Enfield remained positive. So did his professor, Charles Heller, who recalls: "We worked the numbers and the strategy and the marketing. Andy was the typical entrepreneur in that he was very driven."

The best way to develop a reputation was to hit the road, networking with coaches he had met as a player, giving one-hour presentations at colleges and high schools.

The process was long and frustrating but Enfield believed in his product, knowing that he had isolated each detail of the shooting stroke and developed a sound teaching method.

"I broke it all down," he says. "I was scientific about it."

Eventually, several NBA players signed on as clients and, in 1994, the Milwaukee Bucks hired him as a full-time shooting coach. By 1998, he had jumped to the Boston Celtics, where Rick Pitino expanded his role as an assistant. The shooter was learning to coach.

"It's certainly not the toughest thing I've studied in my life," Enfield says "Basketball is a pretty simple game."

His career path now pointed directly toward a life in basketball, but there was time for a detour.

A businessman named Tom Rizk had enrolled his son in one of Enfield's clinics and the two men became friends. In 2000, Rizk invited Enfield to join him in a software startup. Enfield left the Celtics, investing what he calls a "modest" amount in TractManager and signing on as a vice president.

"I was part of a team that worked very hard to build something from the ground floor," he said. "And we were successful."

At the same time, he continued to run clinics, sell videos and do consulting work for NBA teams. He also met his future wife, Amanda.

In a story that has been told often in the past month, they were both living in Manhattan. She had tickets to see her alma mater, Oklahoma State, play a second-round NCAA tournament game in Boston and he was headed there, too.

Through a mutual friend, he offered a ride, not knowing that she was a model who had graced the pages of Elle, Vogue and Maxim. He recalls picking her up outside a Starbucks and thinking, "This is going to be a great trip."

They talked sports the whole way, which led to their first official date - a St. John's game in Brooklyn followed by dinner at Taco Bell. "That was my idea," Amanda says.

The couple got engaged within eight months and, not too much later, Enfield's life took another fortuitous turn.

An old friend in the coaching business, Leonard Hamilton, had taken over at Florida State and needed an assistant. He wondered if Enfield might like to get back into basketball full-time.

In 2006, Enfield joined the Seminoles staff. If anything, he believes his time with TractManager helped sharpen his coaching skills. Hamilton agrees.

"If you're going to be successful in business, you have to be organized and thorough," the Florida State coach says. "It's the same in basketball."

After firing Kevin O'Neill and naming Bob Cantu as interim coach in mid-January, USC had almost three months to conduct a coaching search.

Enfield emerged as a late candidate when Florida Gulf Coast upset Georgetown and San Diego State in its first two NCAA tournament games, but there was more. His background resembled that of USC's athletic director, Pat Haden, a former NFL quarterback, Rhodes Scholar and partner in a private equity firm.

"Andy's had 20 years of success on a lot of different fronts," Haden says. "That's a pretty good precursor for what's to come."

Much has been made of Enfield's achievements in the business world, a good deal of it misreported. "I'm not a high-tech guru or a Wall Street tycoon," he says. "I'm not worth $50 million."

The coach declines to discuss his personal finances other than to say that he lives comfortably and that his initial investment in TractManager has appreciated substantially. But he reiterates that business principles have influenced his coaching style. His players noticed as much when he took over at Florida Gulf Coast two years ago.

"When we had practices, most times they were just over two hours long," forward Chase Fieler said. "Film was brief, too. Very efficient."

FGCU's offensive system allowed players freedom to improvise. Enfield often mentions this - wanting players to "have fun" - and it is something his former Maryland professor appreciates from afar.

"That's typical of the way an entrepreneur deals with people around him when he's building a company," Heller says. "I've started two software companies . . . we wanted to have a great time and enjoy what we were doing."

So no one should be surprised when Enfield promotes his up-tempo style and his experience in developing players, mixing basketball talk with a story or two about his pretty wife.

His arrival has already created a buzz that could be useful for a program that has existed in the shadows of not only UCLA across town but also the football team on its own campus. "My experience with creativity in marketing, that helps," he says. "Operations of a company are similar to a basketball team."

As with every new venture, Enfield has arrived at USC with a plan, detailed strategies for transforming the Trojans. He seems confident that he can succeed where others have failed.

When it comes to basketball, the man is all business.