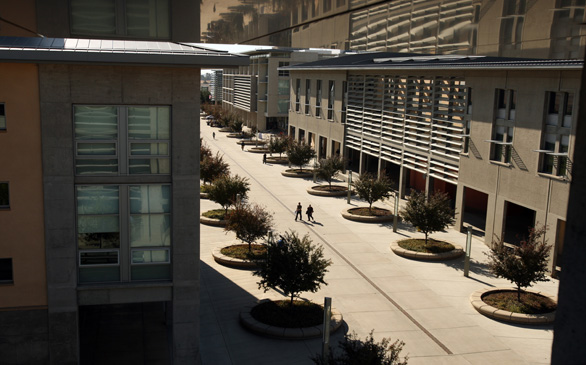 The University of California at Merced is at the forefront of a national movement by universities, students and school officials to tackle a nagging problem: food waste.

Fueled by a growing awareness over how much food Americans waste, the schools are finding new ways to combat the issue, including salvaging uneaten food from cafeterias, using software to track food waste, and creating a composting program.

The problem of food waste was highlighted recently in a report by the Natural Resources Defense Council. The group found that at least 40 percent of food produced in the U.S. goes uneaten. And waste happens at nearly every point in the food chain, from the farm to the consumer.

While food waste has a hefty cost - an estimated $165 billion a year - it also comes at time when as many as 50 million Americans are not getting enough food to live a healthy life, according to the U.S. Department of Agriculture. It is also taking its toll on the environment, contributing to overstuffed landfills and harmful greenhouse gas emissions.

Colleges and universities have realized that they too play a role in finding solutions and have taken action by launching food-waste reduction programs.

Recently, nearly two dozen colleges were recognized by the U.S Environmental Protection Agency for their efforts.

Dana Gunders, project scientist for the NRDC, said she's been impressed with the work being done on college campuses. She said something as simple as eliminating food trays helps reduce the tendency of placing more food on the tray than a person can eat.

"What is also happening is that they are building awareness on campus and among consumers about the issue," Gunders said. "There is so much forward thinking that comes from colleges and that is very promising."

Among the campuses spotlighted by the EPA was Merced.

The campus has set a lofty goal of consuming zero net energy, producing zero net greenhouse gas emissions and generating zero landfill waste by 2020. To help meet their landfill goals, the university has switched to a reusable food container that can be recycled. It also has begun collecting food waste, along with napkins and paper towels, from their dining hall and using it to make compost.

The compost program works like this: When students return their food containers with leftovers, they place it on a conveyor belt. The container is carried to an area where it is sorted by a student worker. Leftover food and compostable material is placed in one container, the other items in another.

The collected material is then dumped into a large container and picked up by the Modesto Compost Facility. The company uses the university's waste and mixes it with other things, such as grass clippings, to make the compost. The compost is sold at the facility and at the Modesto senior citizens center.

"We are trying very hard to keep as much as we can from entering the landfill," said Matt Hirota, UC Merced's waste reduction/recycle coordinator. "It is better for us and better for the environment."

Federal officials say food is the single largest of type of waste dumped into landfills nationally. It also generates methane, a greenhouse gas.

"And that methane is at a much higher level - 20 times more potent - than if it were composted," said Gunders. "Food scraps degrade very quickly."

The other added benefit to composting food waste is that it provides nutrient rich matter back to the soil, helping to reduce the use of synthetic fertilizers.

To make sure UC Merced's program is running efficiently, Hirota recently spent several hours digging through the campus's garbage. He and student volunteers audited 24-hours worth of garbage to determine how much more they could be composting.

Hirota said that while he did not have final numbers of the audit, it appears more work can be done.

"What we are doing here has never been done before, so it has taken some time to get everyone to understand why we are doing this," Hirota said.

At Fresno State, campus officials are exploring the idea of composting and have been donating unused food, including fresh produce, dairy products and other food items from the dining services to the Bulldog Pantry, a food pantry for the needy.

Other campuses are taking a more high-tech approach to cutting food waste. Chuck Davies, director of residential dining and catering at the University of California-Berkeley, is using a software program called LeanPath to help track how much food the college is throwing away. The system records the weight of all the food being tossed, what type of food it is and why it's being tossed. The information is compiled and analyzed.

With the data, Davies can zero in on what foods are being thrown away more frequently and can make adjustments to the menu. For example, Davies found the cafeteria was overproducing servings of turkey sausage and scrambled eggs so he cut back on the eggs and eliminated the sausage.

Although some employees are more diligent than others at recording the information, Davies said the first year results were promising. The numbers showed that the college's dining services saved about $100,000 and eliminated 27 tons of food waste.

"It think the results were substantial," Davies said. "But we can do better."

Also trying to improve its numbers is the Food Recovery Network, a coalition of 20 colleges and universities that is taking uneaten food from dining halls and donating it to agencies that feed the hungry.

The network got its start at the University of Maryland, College Park, in 2010 where students began taking notice of the large amounts of food being thrown away. At the same time, they realized many in the Washington, D.C., area were struggling with hunger. Before long, the students created a system where student volunteers would collect the leftover food and give it to area homeless shelters.

Since 2011, when the group formally became a nonprofit, the network's chapters have collected 120,000 pounds of food, or the equivalent to 96,000 meals.

"One of our goals is to get as many college campuses involved in this as possible," said Nick Murphy, who heads one of the network's chapters at Pomona College in Southern California. "And we are gaining steam. More people know there is a problem, but they don't know how bad it is and more importantly they don't know how much food they are really wasting."