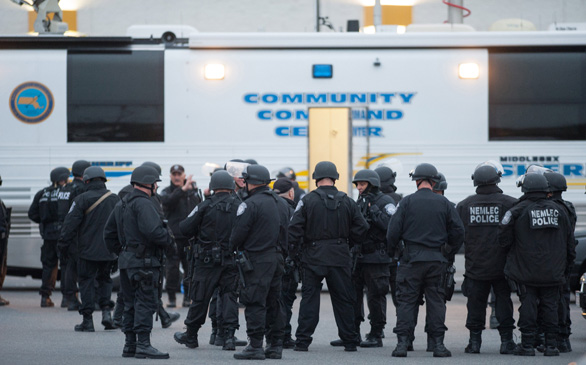 The MIT police officer who was shot dead Thursday night by the suspects in the Boston Marathon bombings has been identified as a 26-year-old Somerville, Mass., man who had been on the job for a little more than year, authorities said.

Sean Collier had been an MIT officer since January 2012, and before that was a civilian employee with the Somerville Police Department, according to a joint statement from Middlesex Acting District Attorney Michael Pelgro, Cambridge Police Commissioner Robert Haas, and MIT Police Chief John DiFava.

Collier was a dedicated officer who was well-liked by his colleagues and the MIT community, Haas said.

Somerville Mayor Joseph Curtatone said Collier had worked in Somerville police's IT department for about five years, and continued to volunteer with the city's youth boxing club and with the police department's website, which he helped set up, even after he joined the MIT police.

Collier was found shot in his car about 10:20 Thursday night. He was taken to Massachusetts General Hospital with multiple gunshot wounds, where he was pronounced dead, authorities said. An investigation determined that two men were involved in the shooting, authorities said.

Police then received reports of a carjacking at gunpoint by two men in Cambridge. The driver was held in the car by the suspects for about a half hour before he was released unharmed.

Dozens of police who had converged on the initial MIT scene after the shooting raced toward Watertown shortly before 1 a.m. Police had tried to pull over a carjacked vehicle, resulting in one suspect, Tamerlan Tsarnaev, being shot dead and 33-year-old MBTA officer Richard H. Donahue Jr. wounded.

A manhunt was launched for Dzhokhar Tsarnaev, the suspect who fled, with heavily armed SWAT teams and uniformed cops with their handguns drawn spreading through the area.

Collier received a criminal justice degree and graduated with honors from Salem State University in 2009, according to a message posted by the university today.

"Our thoughts and sympathy go out to Sean's family as well as all those affected by the recent tragic events in Boston," the message said.

Curtatone said he was grateful he got to know Collier.

"This is shocking, surreal, sad. Every day something hits closer to home," he said. "Now, a member of the Somerville family has been lost tragically. My heart goes out to his family and his colleagues on the MIT and Somerville police departments."