Celebrate Thai Culture at The Mercado 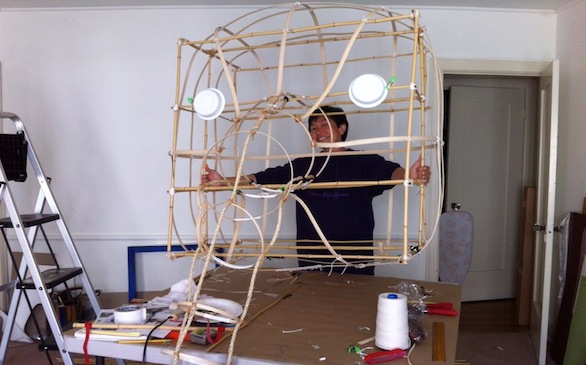 The elephant construction for the procession on April 28 for the Thai New Year.
(Credit: Courtesy of The 3 Collective)

Mercado La Paloma, a multicultural community arts and culinary destination close to the University of Southern California, is celebrating Thai culture; it’s part of their on going “Cultural Continuum” project.

To celebrate the culture and spirit of Thailand, The Mercado has announced new free events. The first event comes tomorrow (Saturday, April 20); it’s a shadow puppet presentation and workshop from 7-9 p.m. The Artistic Director of Triumvirate, Leslie K. Gray, is scheduled to lead the night of festivities.

According to a prepared statement from the spokesperson of The Mercado, a special presentation of “Change the World” will follow. It’s a family-friendly overhead projector shadow show titled, “Out of the Shadows: A Night of Community Expressions and Conversations.” It’s an effort in hopes to create an open forum and stimulate dialogue about possible “fracking” projects in local neighborhoods.

The festivities will continue, however, with the Thai New Year Festival on Sunday, April 28 from 12- 5 p.m. According to the statement, the highlight will be a procession from Esperanza Community Housing in downtown Los Angeles to The Mercado; a 20-foot puppet elephant constructed by the local South LA community members will lead it. If aiming to be a part of it, The Mercado‘s encouraging anyone from surrounding areas to participate.

The entire process will be documented and broadcast over The Mercado’s social networks (Facebook/Twitter) to allow everyone to be part of this special community-building activity. Additionally, the grand unveiling will take place during the Thai Festival festivities.

The "Cultural Continuum" cultural programming is a part of Esperanza Communities Housing's ArtPlace grant, which is a federal fund sponsoring art and cultural programming in communities across L.A. Previous events in the series have included program focused on Latin and African heritages with exclusive performances by leading artists such as L.A.-based La Santa Cecilia, Mark de Clive-Lowe and others.