Frida Ghitis: Boston Bombing Should Make Us More Aware, But Not Fearful 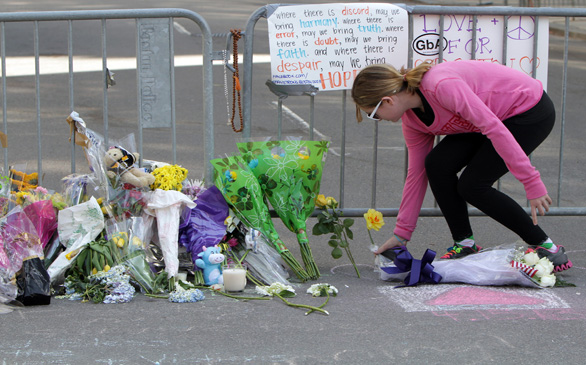 On Monday afternoon, as the Boston Marathon bombings brought back that sense of dread that hung in the air just after the 9/11 attacks, I received a message from a friend in Baghdad, also watching the carnage on television from the Middle East. "Sad," she said, with succinct poignancy.

I was moved by the gesture. And, noticing the commotion, shock and outrage that surrounded the Boston carnage, I was reassured to see that no one takes terrorism in America with complacency; no one accepts it as a "normal" part of life.

Consider that the very same day the explosions struck the marathon, terrorists in Iraq struck with a fury. Almost 20 separate bombs exploded in different cities across the country, killing scores and injuring hundreds of people, many of them critically, as violence escalated sharply ahead of elections. It barely made the news. To some, it seemed routine.

When terrorists strike, they tear at the social fabric. They shake our sense of reality and they threaten to undo our ideas about what's normal, what's human. It is incomprehensible that a human being could deliberately, meticulously undertake to kill innocent people engaged in their daily lives, and to kill as many as possible, as brutally as possible.

That's one reason why deaths at the hands of terrorists, regardless of the casualty count, have a special emotional resonance different from deaths brought by diseases, accidents or natural disasters.

Terrorism presses us to change everything, as the cliche went after 9/11. The right response is to carry on with our lives, while never allowing terrorism to become "normal." We should reject the "new normal" temptation, even as we reject the common terrorist objective of permanently disrupting our quality of life, personal freedoms and peace of mind.

It is a difficult balancing act, carrying on, remaining safe, not allowing the perpetrators to instill fear, while insisting that the killings will never stop provoking unqualified moral outrage.

One of the countries with vast experience in enduring repeated terrorist strikes, as many have noted in recent days, is Israel, where hundreds of terrorist attacks have killed thousands and injured many, many thousands.

During the worst of the terrorist attacks against Israeli civilians a decade ago, it seemed every few days a figure would climb inside a bus filled with children and grandmothers and students and workers, and suddenly blow himself up. Someone would walk into a coffee shop filled with teenagers and detonate a suicide vest. It happened over and over and over. The victims included pregnant women, countless children, elderly grandmothers and grandfathers, Israeli Jews, Israeli Arabs, Americans, Christians, Muslims. The terrorists came from Hamas, Palestinian Islamic Jihad, the al-Aqsa Martyrs' Brigade, Fatah's Tanzim, and other groups.

It seemed ever present, the wail of sirens on their way to the latest tragedy, the sight of emergency personnel expertly working a scene where body parts lay strewn everywhere, where ambulances loaded up the bloodied, stunned wounded, with mothers crying, anguished relatives searching for their loved ones.

It happened so many times, and people tried so hard to get on with their lives, that it threatened to become common place. It seemed as if, by sheer force of repetitiveness it might lose its power to shock.

You can see the small plaques marking terrorist targets throughout Israel today, in front of pizza places, bus stops, everywhere. There are hundreds of them, listing the names of the victims. Each name an emblem of a network of lives shattered forever.

Israelis, however, made it a point to clean up quickly and return to the scene for the same reasons that had brought them there in the first place. Restaurants were hosed down and reopened without missing a beat.

But there is nothing acceptable about terrorism. And beneath the resilience and determination lay raw pain. A journalist friend suffered a heart attack on the way to yet another suicide bombing in his hometown, having rushed to dozens of similar, emotionally wrenching scenes.

We know little about the perpetrators in Boston, and after 9/11 and Oklahoma City, we all feel more experienced and knowledgeable. It's sad, as my friend said, to become experienced in the subject of terrorism. As we do, however, we should watch against growing jaded. We should always regard it as an affront to humanity, wherever it happens.